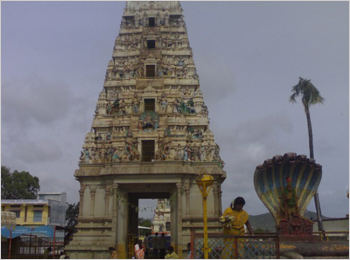 Ghati Subramanya temple of Lord Subhramanya is located in the suburbs of Bangalore near Tubagere in Doddaballapura. It's around 60 kms from the city. It is an ancient Hindu temple and a very famous religious site. 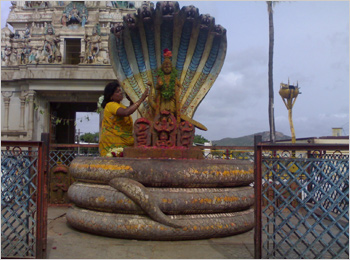 Ghati Subramanya temple has history of 600 years, when Ghorpade kings of Sandur who reigned Bellary built this temple. The temple stands as a testimonial for granting child to a childless couple who vow to install the idol of snake at the temple premises. There are thousands of such vowed idols of snake at the temple. An east facing deity's idol with a cobra with seven heads is carved out of a single stone. In opposite direction is an idol of Lord Narasimha, facing west. There is a large mirror behind both the idols in inner sanctum, so that both the deities can be seen at the same time.

The temple is age old and is built in Dravidian style. The architecture of the temple is similar to that of Shri Chamundeshwari temple on Chamundi hills at Mysore and Shri Nanjundeshwara temple at Nanjanagudu and many other temples in and around Bangalore and Mysore. Devotees of both the deities, Lord Lakshmi Narasimha and Lord Subramanya visit the temple in large numbers.

Apart from this ancient temple in Ghati there are other tourist spots in the radius of 20-30 kms around the town, making it an exciting weekend getaway for the city dwellers. The idol of the deity Lord Subramanya is said to be very old and a swayambhu one meaning carved out on its own in a stone. Both the idols of Lord Subramanya facing east and Lord Lakshmi Narasinha facing west stand back to back in the inner sanctum. The devotees get to see Lord Lakshmi Narasimha by way of a strategically placed mirror. The temple is particularly famous for childless couple, who worship the Lord to bless them with a child. 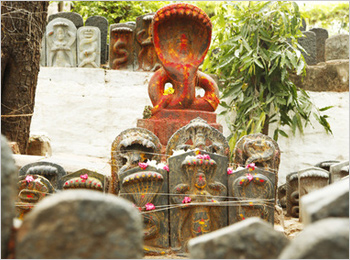 The specialty of the temple is that both the deities Lord Subramanya and Lord Lakshmi Narasinha stand together facing opposite directions. As mythology of the place puts it, both the idols have surfaced from the earth. This temple is an important religious hub in South India for snake worshipping.

Special rituals are performed during Brahmarathotsavam, i.e., on the day of Pushya shudda Shashti. Narasimha Jayanti is the other major festival celebrated here.

The cattle fair held here in December is very famous and farmers from neighbouring states of Tamil Nadu, Andhra Pradesh, Kerala, and Maharashtra as well as from many parts of Karnataka participate in the fair.

People offer their prayers to a snake hill, outside the temple and pour milk into the snake hill to please the deity. Called as Nagappa in local language Kannada, one can see many snakes' carvings on the stones under a peepal tree in the temple premises. Devotees seek blessing and favour from the deity here. A silver idol of a snake with many hoods stands near the chief deity, Lord Subramanya.

Ghati Subrahmanya it is about 60 kms from Bangalore and has to be reached via Doddaballapur. Though direct buses are available, they are not frequent. Local transportation is available from Doddaballapur to Ghati Subramanya, with nearest railway station at Makali Durga on the way of Bangalore- Guntakal railway line. The nearest airport is of Bangalore international airport.