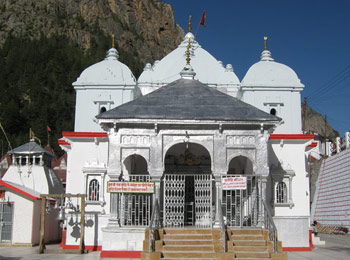 Gangotri is a town and a Nagar Panchayat (municipality) in Uttarkashi district in the state of Uttarakhand, India. It is a Hindu pilgrim town on the banks of the river Bhagirathi and origin of River Ganges. It is on the Greater Himalayan Range, at a height of 3,100 metre 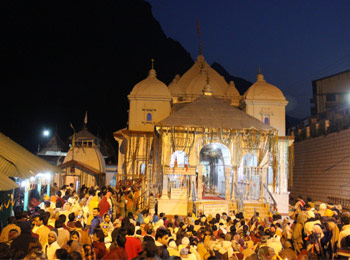 Gangotri, the origin of the River Ganges and seat of the goddess Ganga, is one of the four sites in the Chota Char Dham pilgrimage circuit. The original Gangotri Temple was built by the Gurkha general Amar Singh Thapa. The river is called Bhagirathi at the source and acquires the name Ganga (the Ganges) from Devprayag onwards where it meets the Alaknanda. The origin of the holy river is at Gaumukh, set in the Gangotri Glacier, and is a 19 km trek from Gangotri.

A picture of serenity, the humble abode of Maa Ganga is situated by the side of Bhagirathi River. Mother Ganga is present in the premises of the white temple building in the form of a small silver idol. The amazing mountain range of Himalayas and the flowing Bhagirathi by the side makes for a perfect setting to behold the life-giving, gentle yet powerful deity. The pilgrims are required to bath in the crystal clear waters of the pious river before visiting the main shrine.

As the winter season gets ready to knock on the doors of the mountain region, Goddess Ganga gets ready to leave for Mukhyamath temple in Mukhba village, 20 km downstream. The transfer takes place on the auspicious day of Diwali (Oct/Nov) amid Vedic chants and elaborate rituals. With greater joy and enthusiasm, the Goddess is brought back to the Gangotri temple on the occasion of Akshaya Tritiya (April/May). 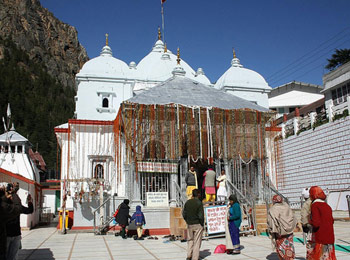 According to Hindu history, Goddess Ganga took the form of a river to absolve the sins of King Bhagiratha's predecessors, following his severe penance of several centuries.

According to this legend, King Sagara, after slaying the demons on earth decided to stage an Ashwamedha Yajna as a proclamation of his supremacy. The horse which was to be taken on an uninterrupted journey around the earth was to be accompanied by the King's 60,000 sons born to Queen Sumati and one son Asamanja born of the second queen Kesani. Indra, supreme ruler of the gods feared that he might be deprived of his celestial throne if the "Yajna" (worship with fire) succeeded and then took away the horse and tied it to the ashram of Sage Kapil, who was then in deep meditation. The sons of the King Sagara searched for the horse and finally found it tied near the meditating sage. Sixty thousand angry sons of King Sagara stormed the ashram of sage Kapil. When he opened his eyes, the 60,000 sons had all perished, by the curse of sage Kapil. Bhagiratha, the grandson of King Sagar, is believed to have meditated to please the Goddess Ganga enough to cleanse the ashes of his ancestors, and liberate their souls, granting them salvation or Moksha. 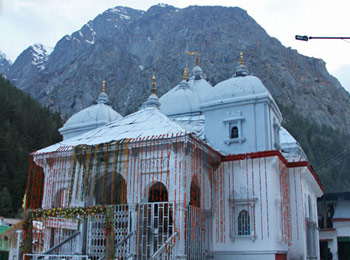 Ganga Dussehra – The festival is celebrated over a period of ten days starting from the first day of the Jyeshta month (May – June) in the Hindu calendar. The word Dussehra can be split into two words, the “Dus” meaning Ten and “Sehra” meaning victory. So the festival means victory over 10 sins.The festival signifies the day that Goddess Ganga descended on Earth to cleanse the souls of cursed ancestors of King Bhagiratha. The pilgrims are convinced that if they pray to Ganga on this particular day, they will be absolved of the ten major sins of a Hindu.  Thousands of pilgrims across the country take a holy dip in the river chanting the Ganga Stotrams. The beautiful Ganga Aarti is performed in the evening where a large number of leaf boats laden with flames, flowers, and sweets are offered to the River Ganga.

Diwali – The holy and much celebrated day of Diwali marks the closing of the Gangotri Temple for public viewing due to the harsh onset of winter. After special poojas throughout the day, the idol of Ganga is taken to the Mukhyamath Temple in the small village of Mukhwa. The temple is the winter home of Goddess Ganga. On this day, people in Mukhwa clean the village in preparation for the Goddess’s arrival. The idol is kept in the Mukhyamath temple among an artistic decoration of deepams and sweets to celebrate Diwali.

Akshaya Tritiya – The auspicious day of Akshaya Tritiya occurs in April – May every year. On this day, the idol of Goddess Ganga is brought back from her winter home of Mukhwa. The Temple is decorated with flowers. The Ganga Goddess is brought back and installed in the main sanctum among the songs and dances of the pilgrims. The homes are decorated with Diyas and people wear new clothes on this day. Special Poojas are arranged in the temple premises as well as in their homes. 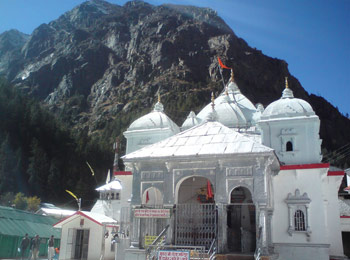 The Aartis and Poojas at the Gangotri temple are performed by a priest known as Pand under the head priest known locally as Rawal. All the priests belong to a village named Mukhwa, located near Gangotri.

Gangotri Mangal Aarti – The morning Mangal Aarti is performed at 6 AM behind closed doors. The public is not allowed to view the Aarti.

Sandhya Aarti – The evening Aarti is performed at 7:45 PM in summers and at 7 PM in winters.

Ganga Devi Pooja – This pooja can be performed both at the Ghat of Ganga near the Temple as well as in the main shrine of the Temple. The Pooja has a special significance if performed on the Ganga Saptami day. The Pooja is done by reciting several Ganga Mantras and Stotrams.

The rituals that have to be performed by a devotee during his or her visit are – Take a dip in the River Bhagirathi, perform Ganga Pooja and then have a Darshan of the Goddess herself at the main shrine.

The options to stay in Gangotri are limited. Most of the pilgrims stay in Uttarkashi or Harsil and make a day trip to Gangotri. However, the Garhwal Mandal Vikas Nigam (GMVN), a Government of Uttarakhand undertaking has a few guesthouses that can be booked for a night’s stay. These Guest houses are located at Bhairon Ghati, Bhojvasa, Shivalik, and Himalaya. GMVN Yatri Nivas can also be booked by the pilgrims. Some of them provide basic facilities only.

The best time to visit the holy city of Gangotri is from April to June and September to November. Winter (November to March) is freezing cold with heavy snowfall which can disrupt the journey. Summer (April to May) is very pleasant with observed maximum never crossing 30°C and can get very cold at night. This is the best season for pilgrimage and sightseeing trips. Monsoon (late July – August) is accompanied by very heavy rainfall that makes it difficult to reach the temple.

One of the most significant facts about the purity of the water of River Ganga is that, the water can be collected and kept in a bottle for forever without it ever becoming slimy, green or spoilt. This is the main reason that the people believe that the water is holy and they keep it in their Pooja grahas as a representation of the deity herself. The Pandav Gufa (cave) located at Gangotri is the place where the Pandavas meditated for Moksha during their final journey in the epic Mahabharata. The Lanka Pul, highest river bridge in India is located at Gangotri and can be visited near Bhairon Ghat. The water of River Ganga collected here is believed to be an Amrit (nectar) and is considered a holy drink. People collect water here and carry it home to be used for holy purposes. It is generally believed that the Pandavas performed the great “Deva Yagna” here to atone the death of their kinsmen in the epic battle of Mahabharata. On the day of Ganga Dussehra, it is believed that taking a holy dip in Ganga and hymning of the Ganga Stotra on this day would cleanse the human soul. Scriptures in the Agni Purana and the Padma Purana mention that bathing in Ganga on this day eliminates 10 types of sins from the human soul. Immersion of ashes of the departed souls in the River Ganga is believed to release the soul from the cycles of death and rebirth.

The nearest airport from Gangotri is Jolly Grant, which is located just 26 km from Rishikesh. From the airport, the travelers need to take either a taxi or the luxury buses to reach Gangotri.

The nearest railway station is located at Rishikesh, about 249 kms away, from where one has to hire a cab or take a luxury bus to reach Gangotri. Rishikesh is not connected by fast trains and Kotdwar has very less number of trains. Thus Haridwar serves as the best railway station if one is visiting Gangotri by train. Haridwar is connected by many trains from all part of India.

Gangotri is easily accessible by road with most of the major cities of Uttarakhand, Uttar Pradesh, Delhi and NCR region. It is located at a distance of 452 Km from Delhi & 229 Km from Rishikesh.