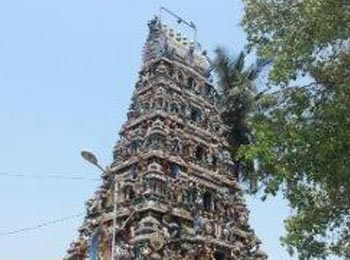 The Gali Anjaneya Temple is among the oldest and most sacred temples in Bangalore. Saint Sri Vyasaraya of Channapattana, a great philosopher and devotee to Lord Anjaneya has built around 732 temples for the Lord Anjaneya (Hanuman). It is believed that Sri Vyasaraya established this temple in the year 1425 at the convergence of two rivers - Vrishabhavathi and Paschimavahini (at present only industrial waste is flowing making Vrishabhavathi seem more similar to drain rather than river)

The west facing Gali Anjaneya is smeared with Sinduram (a saffron colored paste) which is considered auspicious by Hindus. The lord here is shantha swaroopi (Calm). The left hand of Gali Anjaneya is resting on the hip and holding the flower. The right hand is in abhya mudra posture offering the quality of nirbhayathvam to all his devotees. Another attraction of this Anjaneya is that he has a mustache and a yathurmuki that is he is facing the devotees directly with both the eyes. At the temple, one can see the tall Rajagopura at the entrance of the Gali Anjaneya temple and have darshan of Lord Ganesha and Venugopala Swamy. Once one passes the entrance, they canoffer prayers to Sri Rama Parivara and Sri Satya Narayana. The main attraction, Sri Gali Anjaneya Swami is seen facing the Sri Rama Parivara

The uniqueness of Gali Anjaneya Temple is the Car festival is being held for the last hundred and twenty years.

People visit Gali Anjaneya temple to get the blessings of Gali Anjaneya and to get rid of troubles in their life. Politicians come here to worship Lord Anjaneya before starting the election campaigns. Devotees throng here with great faith to get 'Purna Kripa Drishti' from the Lord.

The nearest major airports are in Mysore and Bangalore. Both cities are well connected by road and rail.