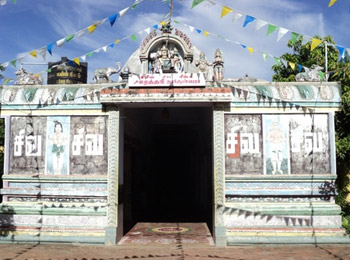 Sri Nithyakalyani Udanurai Ezhuttarinadhar temple is situated around 5 kms from the temple town of Kumbakonam, Thanjavur. Ezhuttarinadhar as the name truly describes, is believed to have the power to grant great memory, passion and skill in oratory to the devotees who come to worship him. Lord Shiva came to be known by the name of Ezhuttarinadhar after he blessed Sage Agasthyar with the tenets of Tamil Grammar. Saint Tirunavukkarasar, fondly known as Appar, had sung the glory of Ezhuttarinadhar, the lord of the temple in his Thevaram hymns. This is the 46th Shiva temple on the northern bank of Cauvery praised in Thevaram hymns. 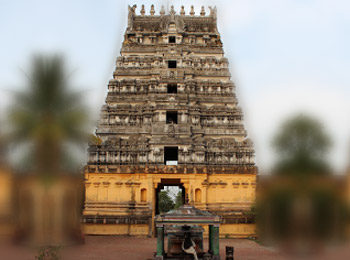 The central shrine faces east and houses the image of Ezhutharinathar (Shiva) in the form of lingam, like in other Siva temples. It is made of granite and is a swayambumoorthy (self manifested). On both sides of the entrance to the sanctum there are separate shrines for Vinayagar and Murugan. The sannidhi of Nandi (vehicle of Lord Shiva), a tall flag staff (kodi maram) and a Balipeeta, the place of offering, are found in front of the Lords sanctum. As in other Shiva temples of Tamil Nadu, the first precinct or the walls around the sanctum has images of Dakshinamurthy (Shiva as the Teacher), Durga (warrior-goddess) and Chandikeswarar, (a saint and primordial devotee of Shiva). The temple area is surrounded by granite walls. Following the legend of the elephant, the roof over the sanctum is in the form of an elephant, called Gajaprashta Vimana. The sthala vriksham is Shenbagam and the sthala theertam is Iravadha Theertham. Iravatam the elephant of Indra is said to have worshiped Shiva here. Hence the sthala theertam is named after him. The temple is said to be close to 1500 years old. Legend has it that Lord Shiva taught the language structure of Tamil to Agasthyar here and is additionally said to have submitted temple records to a ruler. A five-layered Rajagopuram decorates the passage to this temple with 2 prakarams, while a Gajaprishta Vimaanam with 5 kalasams crowns the sanctum. This temple covers a zone of around 2 sections of land. Stucco pictures on the vimanam represent the Stala Puranam. The Shivalingam and the passageway to the sanctum are colossal and the Nataraja picture is of incredible workmanship. Mother Nithya Kalyani, as the name conveys, blesses the devotees in her wedding posture. Women pray to Mother seeking a good match. Nityakalyani Amman is arranged to one side of Shiva, while there is a different temple for Sugandha Kundalambal in the external prakaram. Nityakalyani Amman's hallowed place found near Shiva's sanctum is said to speak to the Kalyanakkolam of Shiva. Engravings from the Chola and Vijayanagar periods are found in this temple. 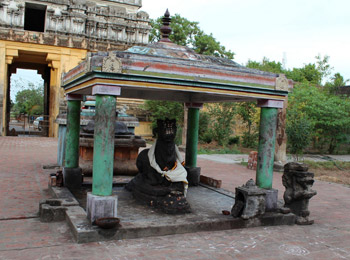 Shiva, otherwise called Mahadev ('Great God'), is one of the principle divinities of Hinduism. He is the incomparable god inside of Shaivism, one of the three most compelling categories in contemporary Hinduism. In this temple God Shiva offers darshan to devotees as Ezhuttarinadhar. The God Ezhuttarinadhar resides in this temple with his consort: Goddess Nithakalyani also known as Sugandha Kundhalambigai. Revering Goddess Nithyakalyani in this temple particularly amid the Navratri celebration is viewed as exceptionally promising.

As per legend long time back a ruler who was administering this spot requested that his bookkeeper present the temple records to him. The books were not progressive. He was hesitant to go before the ruler. Following day, the ruler called the bookkeeper and paid rich tributes saying that of the temple records kept up as such, his was flawless and right. The bookkeeper came to realize that it was God's effortlessness that He went and presented the books. As God composed His own particular temple accounts, He is commended as Ezhuthari Nathar. Another Legend has it that Sun worshiped God Shiva in this blessed area. Innan means Sun, subsequently the name Innambur. It was Innan Nambur before. Presently it has changed as Innambur. The beams of Sun fall on the God on 13, 14 and of Tamil Panguni month comparing to March-April.

The minister, in the wake of performing pooja to the God, composes on the aficionado's tongue with a blossom stem while recounting mantras. It is trusted that subsequent to accepting such a celestial gift, a man's (youngster or grown-up) memory enhances, focus capacity increments and any discourse hindrances are additionally dealt with.

Realizing their wishes and to succeed in their efforts, devotees perform abishek to Lord and Mother and offer vastras.

Innambur is 2 km far north of Puliancheri on the Kumbakonam-Swamimalai road. Town Bus Nos. 6, 35 are available from Kumbakonam.

Near By Railway Station :