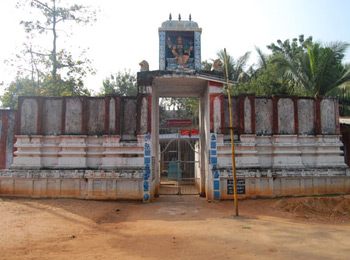 Ekavuri Amman Temple is a Hindu temple located at Vallam near Thanjavur. The temple is dedicated to the goddess Ambika.

The serpent planets Rahu and Ketu are on both side of Ambica believed to be under the control of the Goddess. Women afflicted by Kalathra dosha or Naga dosha (Kalathra dosha is a planetary affliction adverse to the longevity of wife. Kalasarpa dosha occurs in cases where planets in a horoscope are captured in between the two serpent plants occupying the ends). The temple assumes importance as a remedial place for those undergoing such difficulties. Women offer turmeric to Goddess for relief which is given back as Prasad to them. They use it in baths in the faith that they will be married early. Women offer buffalo calf to Ambica for their husbands who are ill. It is to be noted that buffalo is the vehicle of Yama the Lord of death. This worship will prevent Yama from entering these houses, it is believed.

Ambica was worshipped by the Chola Kings who had Thanjavur as their capital. She was their family and protection deity. Before going to a war, they would pray to this Ambica. Ambicas is also known as Makali, Kaithalapoosal Nangai, Vallathu Pattikai, Kalapidari and Ekaveeri. Special pujas are performed on new moon, full moon days with Homas. Special pujas are performed on Chitra Poornima day in April-May. On the last Friday in Aadi month (July-August), devotees walk on fire pit, carry kavadis and milk pots. They offer their prayer commitment by boring their cheeks on both sides called Alagu Kuthu. There are shrines for Varahi, Prathyangara, Lord Muruga, guardian deities as Sangiliathan, Ladasannasi, Vellayammal, Madurai Veeran with Bommi, Karuppusamy, Ekambaram, Pattavaraya and Shiva Linga and Sapthamathas.

Demon Thanjakasura had the boon that he could be killed only by a woman. He began to harass the Devas and captured their kingdom. They went to Lord Shiva for protection. Lord Shiva sent Ambica to destroy the demon. He took many forms to face Ambica’s challenge and that of a buffalo in the end but was killed by Mother’s trident. As the fury of Ambica did not quench even after killing the demon, the Devas again appealed to Lord Shiva to protect them from the fury of Ambica. As commanded by the Lord, Gowri, as she was addressed by the Lord, shed Her fury and became calm and merciful. King Karikal Chola built this temple and named the deity as Hey Gowri – Ekavuriamman as addressed by Lord Shiva. Later King Vallan came to power and the place came to be known as Vallan and the Mother as Vallathukali.

Last Friday of Aadi month and Aadi Perukku (July-August), New Moon and Full Moon days are celebrated in the temple.

How To Reach Ekavuri Amman Temple

The Nearest Airport is Trichy.

The Nearest railway station is Thanjavur.

Vallam is 38 km from Trichy on the Thanjavur road and 12 km from Thanjavur.