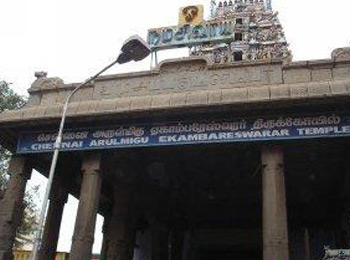 The Ekambareswarar Temple is a popular shrine situated at the busy Mint Street of the Park Town locality in Chennai. The temple is located approximately 3 km from the Broadway bus terminus in Chennai. The temple lies in close proximity to the Chennai central railway station, which is one of the major gateways to Chennai city from the rest of India. Park town and the adjoining George town were the two areas where British originally settled in the olden days. These two places were the then actual Madras. The Ekambareswarar temple is a renowned shrine that existed much before the British settlement at this place.

The temple is quite ancient and is considered more than 1000 year old. The presiding deity of this temple is Lord Shiva known here as Lord Ekambareswarar. The divine Mother Goddess Parvati is known by the name Kamakshi Amman. The temple also houses other deities such as Lord Vinayaka, Lord Muruga, Sri Mariamman.

The main temple consists of the Sanctum sanctorum of Lord Ekambareshwara (Lord Shiva) who graces in the Linga form along with Kamakshi Amman. Other than this, there is also a separate shrine for Mother Kamakshi Amman who is seen gracing her devotees in the standing posture. To the opposite side of the main temple is the shrine dedicated to Lord Ganesha which stands separated from the main temple. A 300 years old Arasa or Ashvastha tree (a sacred tree in South India) is seen on the left side of the temple complex upon entering. One can find a small shrine for Lord Shiva (called as Ramanathar) under this tree. The idols of Goddess Sakthi, Lord Vishnu, Lord Ganesha and Surya Bhagvan (Sun God) are also present in this shrine. The temple also houses a vigraha(idol) of Sri Mariamman separately. The temple has a Gajasthamba after which comes the shrines of Lord Nataraja-Sivakami, Dwara Ganapati, Subramanya with his consorts, Pitchandeswara, Somaskandar.

The main sanctum is surrounded by an inner corridor (prakara) which has the vigrahas of deities like Lord Ganesha, Lord Hanuman, Sri Dakshinamurthy, Lord Vishnu, Sri Brahma Deva, Lord Chandikeswarar, Surya Bhagvan (Sun), and Chandra (Moon). Small shrines dedicated to Saint Adi Sankara, Lord Ganesha and Lord Subramanya together with his consorts are also found. One another significant feature of this temple is that various forms of Lord Shiva such as Vruddagireeswarar, Vadaranweswar, Kasi Viswanathar, Arunachaleswarar, Chidambareswarar, Kalatheeswarar, and Jambukeswarar have shrines within this temple. The Shiva linga of Sri Kasi Viswanathar is quite large and attractive. This deity graces here along with his sons Sri Ganesh and Sri Subramanya. Mother Visalashi has a separate shrine while her Utsava moorthi is Goddess Annapoorni. The temple houses the Navagrahas (nine planetary gods) who are believed to be powerful.

The temple complex also encompasses a larger corridor (precinct) surrounding the main shrine. This corridor starts immediately on entering the temple where Lord Ganesha is found under the Vanni tree to the left. The idols of Vallalar and Chandikeswarar are also found in this precinct. The holy temple tank is found under a tree. There is one another water tank near the shrine of Lord Vaveshwar. There is another Arasa tree where you can find a single rare sculpture with five headed Ganesha on one side and Subramanya on the other side, both under serpent canopy. Small shrines for Bhairava Deva and Hanuman are also present in this precinct.

The Shani Bhagvan at this temple attracts large number of devotees, especially on the occasion of Shani Peyarachi (transit of Saturn). This is due to the fact that Shani Bhagvan is seen facing the Ambigai in this temple. Devotees believe that the Ambigai comes to the rescue of her devotees who are troubled because of the bad positioning of Shani in their horoscope.

The deity Hanuman in this temple is known as Shiva Anjaneyar. The temple also houses a single sculpture of Ganesha and Lord Muruga on either side, sculpture which has a serpent canopy. This sculpture is unique and is very rare to find elsewhere in the world.

According to legends there once lived a pious bhakth (devotee) of Lord Shiva in the Sowcarpet locality of Chennai. He had the practice of visiting the famous Ekambareswarar Temple at Kanchipuram on all auspicious occasions including the Pradoshas that fall twice a month. On one such Pradosham day, he was held up with a lot of work. Despite his employer not permitting him to go to Kanchipuram, the devotee somehow managed to reach the Ekambareshwarar temple at Kanchipuram.

He was terribly tired on his way back from Kanchipuram and thus slept at place in Sowcarpet. Moved by his devotion, Lord Shiva and Goddess Parvati gave him their divine darshan in his sleep. The divine couple also told the devotee not to travel as far as Kanchipuram to visit them thereon as the Lord had graced as a Swayambhu Linga in the very place that the devotee was resting. The following morning, the devotee woke up to be taken aback by surprise to see a Swayambhu Shivling in the place the Lord had mentioned in his dream.

The Chithirai Thiruvizha (Festival) is celebrated annually. It commences with the Flag Hoisting ceremony and the Car (Ther) festival falls on the day of Hastha Nakshthra. The Thiruvizha ends on the day of Chithra Nakshathra with the holy bathing in the river at morning and dehoisting the flag by the evening. The Uthsava moorthis (festive deities - Siva, Vishnu) are brought on procession on different types of Vahanas on this ten day festival for public dharsan.

The 18th day of the Tamil month Aadi is popularly referred as the “Aadi Peruku” which is a festival celebrated thanking the river Cauvery. On this occasion, the Uthsavamoorthis are taken to the river banks where a ceremony called "Deepam" is conducted by Thirukovil, at 6.00 P.M. The last Friday of the Aadi Month is considered auspicious and thus most deities are decorated with sandal powder.

The Aavani Moolam is a special day for the devotees of Lord Siva. The deity is believed to bless all the living being at the river bank is called “The Pittu Thiruvizha”. Aavani Rohini is the birthday of Lord Krishna and is celebrated as "Krishna Jayanthi". The above festivals are conducted for two days.

Aswini Nakshathra falling in the Tamil Month of Aipasi marks the day of Annabishekam (Abishekam with cooked rice) to Lord Magudeshwara and Sasti Festival of six days duration which ends with the Soora Samhara. The Seventh day function is the Marriage Ceremony of Lord Muruga with Valli, Devasena.

Krithika Nakshathra of the Tamil month of Karthigai is generally celebrated as the festival of "Karthikai Deepam" (Day of light). The last Monday of this month is the day for the "108 Sankabishekam" (conches filled with Kaviri water).

The Thiruvathirai Nakshatra of the Margazhi Month is considered auspicious for the worship of Lord Nataraja. Nataraja abishekam is performed on the Lord followed by Festive procession of deities. The "Ekadhasi" falling in this month is a divine day which ensures that one reaches the lotus feet of Sri Maha Vishnu in his heavenly abode called "Vaikuntham".

Thaai Pusam is an important festive day of this temple when the "Theerthavizha" is celebrated.

The Mahasivarathri falling in the Tamil month of Maasi is the most important Saivaite festival celebrated here. This day is most ideal for the worship of Lord Shiva who is said to shower his abundance blessings on his devotees on this particular day.

Panguni Uthram is the most auspicious day for the worship of Lord Muruga.

Ainthu (Five) Kaala Pooja are conducted according to the Kaarana Nagama Pooja system.

It is widely believed that offering silver colored silk thread (zari) and Tulsi garland to the Hanuman here would fulfill one’s life dreams. People who had a good dream can offer prayers here for its fulfillment while those that had a bad dream could offer prayers for its non-fulfillment.

The nearest Airport is the Chennai International Airport located at Meenambakkam.

Regular and frequent bus service are available to Flower Bazzar and Broadway bus stands which are the nearest located bus stations.