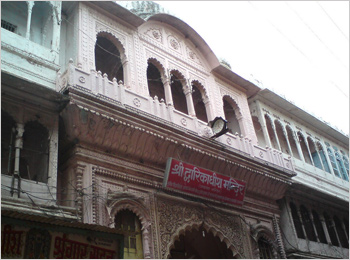 The Sri Dwarakadeesh Temple is situated 30 kilometers from Dwarka lies Shankhoddar Island. Also known as Bet Dwarka or Ramandip, this island is supposed to be the place where Lord Krishna and his family lived. The visit of Dwarka is not complete without a visit to Bet Dwarka, an island at a distance of 30 kms. Off the coast of Okha port, the island is separated by a strip of sea about four kms wide. It takes about half-an hour to cross this channel in a diesel boat operated by the Port Authority. At Bet, there are temples of Vishnu (in the form of 'matsya'), Radha, Lakshmi, Satyabhama, Jambuvanti and Devaki. “Bhet” in Gujarati means island. Bhet Dwarakameans the temple which is in an island. (some say, bhet means “avul” and claim that Kuselan visited Krishnarat this place). Near these ashore,there is a temple dedicated to Lord Sri Krishna . We were told that Lord Krishna killed Shankhasura at this place.We were told that a devout king who had heard about Lord Krishna’s pastimes,built the temple.In this temple also,there is a big flag post.There is also a separate sannadhi for Devaki in this place which is not to be found anywhere. It takes easily one hour to cover all the places. It is interesting to note that though this place is an island,the drinking water is very sweet like amrutham and there are more than 500 families residing in this small piece of land which is 9 square miles only. 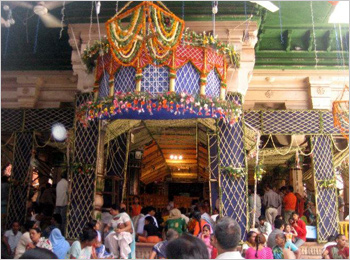 The temple is situated on a small hillock. Probably,Sage Travel information to Dwaraka divya Durvasa had left this place at the time of cursing. In this place, the river joins these a and it is surprising to note that at this place of sangamam,the river water is sweet and the sea water is salty. Bet Dwarka now is abode of 20 Vishnu temples, 23 shiv temples, including well known Dhingeshvara, Nilkantheshwar, Abhaya, Dhara shakti peeths along with other 14 Devi temples. Nine Hanuman temples including well known Hanuman Dandi & 84 Choryashi Dhuni Inscription at very ancient temple of Shakhnarayan Dasavtar temple suggested that during Samvat 1774 (1718 AD) Maharao Pragji did repairs to all these temples. Again repair was done by Queen Jhale Chhot Rani in samvat 1852 (1796 AD), as their sons for ma tool Bet idol to Mandavi in samvat 1320 (1270 AD). Bet has glorious history as Meera again appeared in Bet. Nana Saheb Peshava (last leader of 1857 independence) passed the last years of his life in Bet Dwarka. Puja in Bet Dwarka is up till now done as directed by Goswami Vithalnathaji during his visit in 1567 AD. Bet Dwarka was adobe of several Sufis, Haji Ali, Haji Karmani, Gevalsda, Joda & other, since early 2nd century when sufis had not yet joined Muslims. Bet Dwarka was very safe place for yadavs being protected by the sea. However invaded by the British people in the end of nineteenth century.

Shakti temple at Samiyani Mat is an island about 1 km north to Okha port, also considered to be protecting Goddess of this area. It also has light house inaugurated in 2000 AD. Hanuman Dandi is in Bet Dwarka 5 km north to main mandir complex. One Hanuman goes up 1 mm a year & another Hanuman image goes down 1 mm naturally, where Prem Bhikshu Maharaj of Bihar a professor turned to sanyasi in 1967 AD. established Akhand (continuous) Ramdhun. 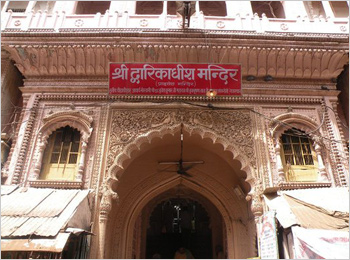 Lord Sri Krishna (Dwarkadhisa) at Bet Dwarka in a similar posture as in Dwarka town with difference of holding Shanka (Conch) in oblique position. There are separate sannidhis for His consorts and mother Devaki. There are separate sannidhis for Perumal,HIS mother Devaki, His 8 chief consorts, Purushotham, Lakshmi Narayan, Dhauji(Balaraman),Radha_ Krishna, Satyanarayana Swamy ,Madhava Perumal, Garuda. 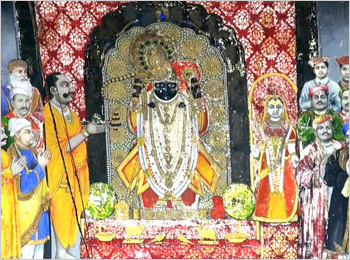 Bet Dwarka is considered the part of the ancient city in Indian epic literature Dvārakā found in Mahabharata and Skanda Purana. Gujarati scholar Umashankar Joshi suggested that Antardvipa in Sabha Parva of Mahabharata can be identified as Bet Dwarka as Yadava of Dwarka said to travel to it by boats. It derived its name Shankhodhar as the island is a large source of conch shells (Shankh). Archeological remains found under the sea suggest the existence of settlement during Late Harappan period of Indus Valley Civilization or immediately after it. It can be reliably dated to times of Maurya Empire. It was a part of Okha Mandal or Kushdwip area. Dwarka is mentioned in the copper inscription dated 574 AD of Simhaditya, the minister of Vallabhi under Maitraka. He was the son of Varahdas, the king of Dwarka. The island, along with Okhamandal region, was under Gaekwad of Baroda State. During Indian rebellion of 1857, the Vaghers captured the region in 1857. Later by joint offensive of British, Gaekwad and other princely states troops ousted the rebels and recaptured the region in 1859. After independence of India in 1947, it was integrated in Saurashtra State. Later Saurashtra merged with Bombay State under state reorganization scheme. When Gujarat was created from bifurcation of Bombay State, Bet Dwarka came under Jamnagar district of Gujarat. Devbhoomi Dwarka district was created from Jamnagar district in 2013 so it became part of it.

The best time to visit Bet Dwarka is from July to March when the weather and climate in Dwarka remains very pleasant.

Bet Dwarka can be reached by ferry service from Okha. The first sea bridge of Gujarat is proposed between Okha and Bet Dwarka. The 2 km (1 mi) long sea bridge is estimated to cost 400 crore. The nearest airport is Jamnagar (137 km). Dwarka is a station on the Ahmedabad-Okha broad gauge railway line, with trains connecting it to Jamnagar (137 km), Rajkot (217 km) and Ahmedabad (471 km), and some trains that continue all the way down the coast through Vadodara, Surat, Mumbai, Goa, Karnataka, to the southern tip of India in Kerala. Dwarka is on the state highway from Jamnagar to Dwarka. Direct buses available from Jamnagar and Ahmedabad.

Temple of Saamb and Lakshmana