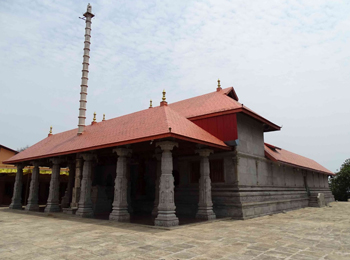 Kunjarugiri is a village in Udupi district of Karnataka. It is about 11kms from the city of Udupi, near Shankarapura. The village consists of a hill Vimanagiri, known as Durga Betta, on which stands a temple of Devi Durga. The temple is called Kunjar Amma by the locals in the Tulu language. 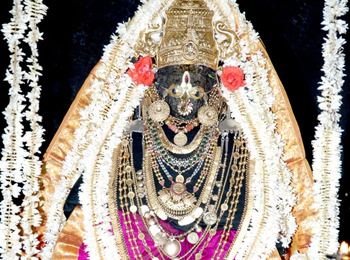 The temple stands on the top of the hill Vimanagiri, amidst lush greenery surrounding it. The place is calm and provides a serene atmosphere for devotees who come to worship the goddess. The idol of Devi Durga is an antique master piece and gives a divine feeling for the pilgrims. The devotees feel the spiritual solace and the potent protection at the feet of Durga Devi. The divine atmosphere surrounding the temple complex, the four punya theerthas ( holy ponds) around the temple, etc makes it an amazing place for meditation and worship.

Parashurama, who is an incarnation of Lord Vishnu, is believed to have erected the temple in honour of Devi Adi Shakti. It is said that when he created Kerala, he found a pearl from the depths of the sea. He made a nose ring using the pearl and adorned the idol of Kunjaru Amma with it. However, legends often quote that the sea always retrieves whatever is taken from it. So, in order to protect the idol from the sea, Parashurama installed the idol on top of the Kunjaru hill. But even to this day, the sea keeps coming closer to the hill.

Sri Madhvacharya is the founder of the Dvaita School of philosophy. He had the practise of visiting this temple every day during his childhood. One day, when he was in the Kunjaru temple, his mother had called out his name aloud from Pajaka, which is a couple of kilometers away from the temple. Sri Madhavacharya is believed to have jumped straight to his house on hearing his mother calling him. His footprints can be seen on a particular rock, even today. There are four ponds or 'thirthas' around the temple. Sri Madhvacharya is said to have visited them every day. The four ponds are called Dhanus Thirtha, Gada Thirtha, Bana Thirtha and Parashu Thirtha.

Goddess Durga’s idol is in the form of Chaturbhuja which literally means ‘four hands’. The upper hands hold the sacred Shanku (conch) and Chakra, which are the symbols of protection, while the lower hands hold the Dhanus (bow) and Trishula (trident), which are the symbol of destruction of evil (Dushta Samhara). Mahishasura, an evil demon killed by the Goddess, lies at her feet, symbolizing the destruction of ego. Though the idol of Devi Durga is depicted to be angry, her face is said to have an unusual smile and divinity.

Sharannavaratri is an important festival that is celebrated here. Navadurga Kalpoktha Puja is performed during the nine days of Navaratri. Large number of devotees visit this temple during the festive time of Navaratri and offer their prayer to Goddess Durga and seek her blessings.

Dwajarohanam is performed on the triyodasi thidhi of the Maagha suddha month. The Rathotsava (Annual car festival) is held in a grand scale with devotion on Maagha shuddha Poornima day.

The Mangalore International Airport is the nearest airport.

The closest railway station is the Udupi Railway Station. Many trains are available from this station connecting different parts of the country.

Kunjarugiri has well laid roads on the hills. It is also well connected with nearby cities. One can reach the top of the hill either by steps or by road.