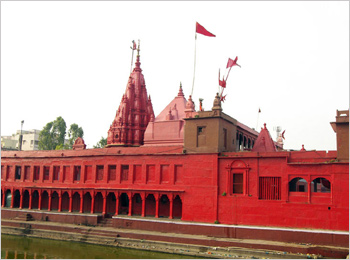 The Durga Mandir is located on the Sankat Mochan road, adjacent to Durga Kund, 250 meters north of Tulsi Manas Mandir, 700 meters north-east of Sankat Mochan Mandir and 1.3 kilometers north of Banaras Hindu University. It is also known as Durga Kund Mandir, Durga Temple and also monkey temple, is one of the most famous temples in the holy city of Varanasi. This temple has great religious importance in Hinduism and is dedicated to the Maa Durga. Durga Mandir was constructed in 18th century by Bengali Maharani (Bengali Queen). 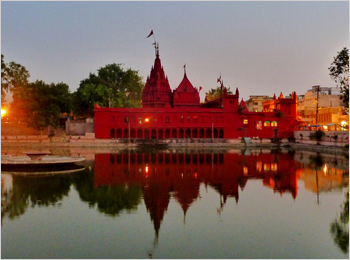 The Durga temple was constructed by a Bengali Maharani in the north Indian Style with multi tiered shikhara. An attractive pond known as the Durga Kund is made on the right side of the temple which really increases the beauty of the temple. The pond has stone stairs at all sides as well as there is watch pillars at each corner of the pond. The statue of Goddess Durga is not human made; it was appeared by its own in the temple. A millions of Hindu devotees go to the Durga temple in the Navratri and other propitious occasions and pray to the Goddess Durga to complete their wishes. This temple is made up in the square shape with the red color stone representing the color of the Mata Durga. Some of the devotees make a round around the building of the temple for their religious importance he Hinduism. It is considered that Durga Mata always protects the Varanasi from problems. Another Durga temple, known as the Brahmacharini Durga Temple is situated close to the Durga Ghat (means Durga Kund) at the bank of the holy river Gange in Varanasi. Durga Ghat is one of the most famous Ghat in the Varanasi was built in 1772 by a saint, Narayana Diksit.

On the right side of the Durga temple, a rectangular tank of water known as Durga Kund (Kund means pond or pool). Earlier it was directly connected to the river so that it can automatically replenish. But currently the water channel is closed to block the water supply. The water in the pond is collected by the rain or drainage from the temple. At the occasion of Nag Panchami, the act of showing Lord Vishnu resting on the Shesha Nag is recreated every year in the Durga Kund. 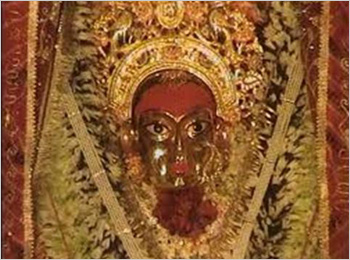 In the Hinduism, it is considered that Mata Durga is the incarnation of the Shakti (Parvati, the consort of Lord Shiva) means female power. Mata Durga is dressed in red color having ride on a tiger and entirely equipped with the Shiva’s trident, Vishnu’s discus, sword and such else. People have a belief that the Holy Scriptures confirms the location of Goddess Durga at this spot only and she has kept this place for many centuries. She is said to protect Varanasi from the south, as one of the fierce goddess guardians of the sacred zone. People also believe that the image of Durga was never established by human hands, but is a self-manifest image. It appeared here of its own accord. 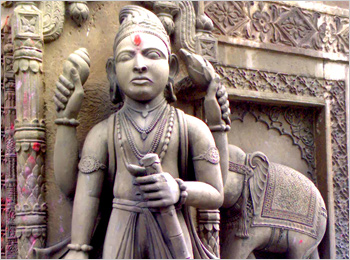 Legend has it that the Ayodhya king Dhriva sandhi had two wives known as Manorama and Lilavathi. They have son named Sudarsana (from Manorama) and Satrijith (from Lilavathi). Both sons were getting their education very well. One day, the king Dhriva sandhi went to hunt and killed by a lion. The minister of the king had decided to make next to Sudarsana but the second wife of the king had opposed it. Yathajith (father of Lilavathi) made a plan to kill Sudarsana and Manorama got afraid. And she left the kingdom with her son and went to the saint Bharadwaja at Trikutaadri in order to save her child. Another story goes that once, Sudarsana was playing with his friends and heard Kleeba word (means impotent). After some days he forgot the actual word and uttered Kleem always. Saint noticed that educated him to worship, the Vaishnavi (Goddess reverenced by Kama beejakshara). He started to worship the Goddess Vaishnavi and once She came in front of him. She was happy with him and given a spiritual Bow and arrows to always win in the battle field.

There is also another tale that suggests that Sasikala (daughter of the king of Kashi, Subahu) was fallen in love with the Sudarsana as she heard more about him. One night, Mata Vaishnavi appeared in the dream of her and told to marry Sudarsana. Sudarsana went to the Swayamvara of Sasikala with his mother. Satrijith was also there in the Swayamvara with his grandfather in law; Yathajith. He announced and warned Sasikala that she should select Satrijith as her husband otherwise he will kill both. Father of Sasikala was very afraid and tried to agree her daughter to marry with Satrijith. But she denied and told her father that Mata Vaishnavi would protect them.

Subahu married his daughter with the Sudarsana on that night. By hearing this event, Yathajith came with his army at the border of Kasi to fight with Sudarsana. A serious battle had started between them, then Goddess Durga become visible in front of them in the sky and killed both (Yathajith and Satrijith). The whole army got afraid and went away from the battle field. In this way Sudarsana got victory on the battle. By knowing all this, Subahu also became devotee of the Goddess Vaishnavi and worship too much of Her. Goddess Vaishnavi became happy to him and asked him to get any boon from her. Subahu prayed Her to reside in Kashi and defend them. Goddess Vaishnavi accepted and reside on the bank of Durga kundam, where Subahu constructed a temple. After victory Sudarsana went to the Ayodhya and started ruling Ayodhya.

Phones and cameras are prohibited inside the temple. Though the temple is open to all, but only Hindus are allowed to enter the main sanctum sanctorum.

The Varanasi railway station is connected to major cities of India via rail. From the railway station, tourists can hire a taxi or a cab to explore the city.

Varanasi is connected to major cities of Uttar Pradesh and neighbouring states by state-run buses. Private air-conditioned buses are also available from nearby cities to Varanasi.