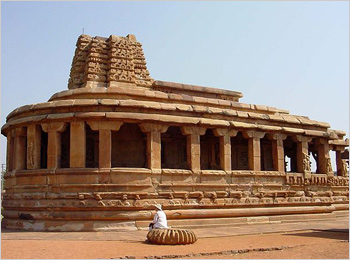 The Durga temple is a medieval era Hindu temple that is located in Aihole in Karnataka. 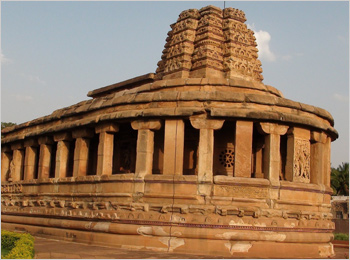 The temple was constructed somewhere during the 7th and the 8th century by the Chalukya Dynasty. The architecture is Dravida with a Nagara style. Even though the temple features a Durga sculpture, the origin of the name is not because of its dedication to Durga goddess, but because Durga means protector or a fortress. The temple formed part of a fortification probably of the Marathas. The most original feature of the temple is a peristyle delimiting an ambulatory around the temple itself and whose walls are covered with sculptures of different gods or goddesses. Two staircases provide access to the porch at the entrance of the temple itself. The sober and square pillars are decorated with characters around the porch and the entrance to the peristyle. The parapet is carved with niches and small animals. The porch gives access to rooms with pillars ('mukhamantapa' and "sabhamantapa") to get into the heart of the shrine (garba griha). The plan of the temple is oblong and apsidal. It means that the corridor with pillars between the porch and the heart of the shrine encompasses the heart of shrine and allows one to run the parikrama (circumambulation ritual). This apse gives outward through openings between the pillars. The shape of the temple, in Indian traditional architecture, is known as Gajaprasta which means the resemblance to the back of an elephant. The temple's unusual apsidal form is thought to imitate the earlier Buddhist Chaitya halls, but later studies established that apsidal design in Indian architecture is pan-Indian tradition, which was in practice even before Buddhist architecture. The heart of the shrine (garba griha) is surmounted by a tower which announces the future higher towers shikharas and vimanas. 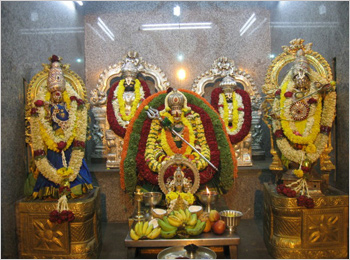 The temple is dedicated to Vishnu and Shiva. 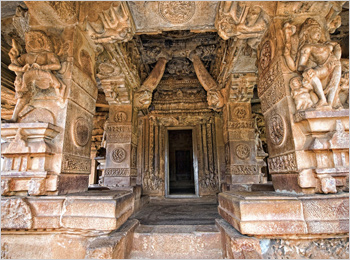 It lies to the north-east of Pattadakal, along the Malaprabha River, while Badami is to the west of both. Aihole is around 12 kms from Pattadakal and 34 kms from Badami. The state highway running between Badami, Pattadakal and Aihole doesn’t offer good and frequent transport options. State bus frequency is very less.