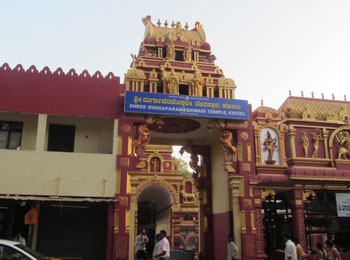 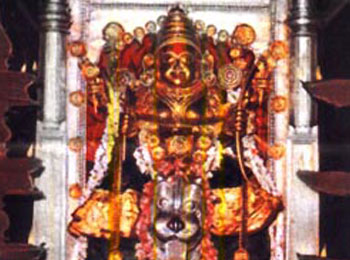 A temple town located at a distance of 29 km from Mangalore city in Dakshina Kannada district is named Kateel (also known as Kateelu). This holy place is surrounded by wide scenes and stunning greeneries. 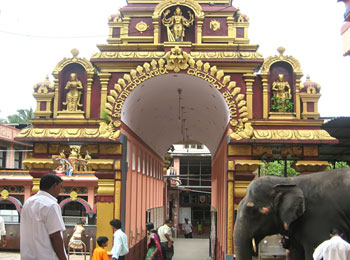 Thousands of pilgrims visit the temple in order to seek the blessings of Goddess Durga Parameshwari. There are some more idols present in the temple like that of Ganesha, Brahma Chamundi and Sashtara or Ayyappa. 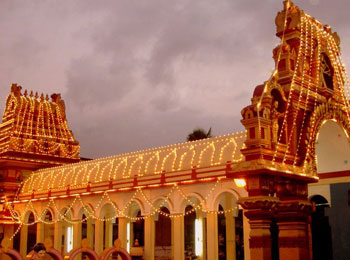 Past the Pravesha Gopura (entry tower) and before entering the railed bridge leading up to the shrine skirted by the river can be seen a huge rock. This is the Raktheshwai before the Devi took the form of female bee to kill Arunasura. She killed his flowers and his army in the form of Raktheshwari. The mother is found of music and dance and also of Yakshagana. When Yakshagana is being played in the car street of the temple She is believed to sit on a stool beside this stone and watch the performance. She is worshipped three times (at three joints of the day time) every day. On every Sankramana day devotees from the locality and form outside make offerings of coconuts.

After making the Darshana of Sri Devi, while doing the Pradakshina, the devotees comes across the shrine of lord Ganesh situated to the south of the sanctum sanctorum. He is seated facing south. In the hall in front of the shrine there is Yajnakunda in which the fire sacrifice is performed daily by the priests. Ganahome and Panchakajjaya are the favorites of Ganesh which the devotees specially offer to the lord.

To the southwest of the main shrine is the abode of Kshetrapala. After the nightly Rangapooja, a special service offered on occasions and on festival days, a special pooja and coconuts are offers as service to Kshetrapala.

There are in the Temple two shrines of Naga. The one near shrine of Kshethrapala is in the inner yard of the Temple the other in the outer yard in the ‘Vana’ opposite of the Temple. Daily Abhisheka, special offering on Nagarapanchami are among the rituals performed at these shrines.

Past the Temple and second bridge, on way to the Annachatra, the dining house, is the shrine of Brahma to the south of the Temple. The devotees have found out by experience that avowing an offer of coconuts in the event of loss of precious possessions will ensure their restoration. On the sixth day of the annual festival takes place the grand ‘Bhoga’ worship to Brahma.

Adjacent to the junior college is situated the shrine of Chamundi and her family deities. ‘Bhoga’ worship is offered on a grand scale on the day of Vrishabha Sankramana.

During the battle in which Goddess Durga killed Shumbha and Nishumbha, one of the ministers, Arunasura, fled away from the battlefield to save his life. Later on he became the leader of the demons(Rakshasas). He started disturbing the sages and also destructed their Yajnas. Annoyed Devas stopped raining.This resulted in total draught,scarcity of water and shortage of food grains on earth. Touched by the pathetic conditions of the people, Maharshi Jabali, a great sage decided to perform a Yajnah in order to appease the Devas.

For the ritual he approached Devendra and requested him to send (a sacred cow, Kamadhenu. As Kamadhenu was in Varuna Loka, Devendra permitted him to take Nandini, the daughter of Kamadhenu to assist him as Homadhenu ,the symbolic cow for the ritual in his proposed Yajna. Finally Jabali went to Nandini and requested her for the ritual. Nandini refused to accompany him,also abused the earth and the people there. As the sage felt that Nandini was firm on her denial, he cursed her to flow as a river on the earth. Terrified Nandini prayed to him for mercy.The kindhearted sage suggested her to pray Adhishakti to be freed of the curse.She followed the words of the sage and pleased by her prayers Goddess appeared before Nandini and told her that as nobody can trespass the sentences (Rishi Vakya) of a holy sage,so she has to flow as a river.But she told her that she would take birth as her daughter and purify her from the curse. Satisfied by the words,Nandini made the earth green once again by emerging as a river on the day of Magha Shuddha Poornima from Kanakagiri .

In the meantime Arunasura received a boon from Brahma. Accordingly he was freed from fear of death by men or women or by any two legged or four legged animals & creatures,also the Trinity and the Devas. Goddess Saraswathi also blessed him with the Holy chants, Gayathri Mantra. Thus he became powerful.He conquered Heaven by defeating the Devtas. the Devatas, and the Trinity pleaded Adhishakti for the rescue after the defeat. She too was unable to destroy him until Arunasura stopped reciting Gayathri Mantra. Brihaspathi (Guru of Devatas) was sent to distract Arunasura ,so that he stopped the recitation of gayatri mantra.

Brihaspathi reached Arunasura and flattered him. He poisoned his ears and was successful in diverting him from his meditation. Arunasura started feeling himself more than God.He ordered his subjects to worship him and troubled the sages by spoiling their Yajnas. As per her promise Goddess took the shape of Mohini, a charming woman and started wandering in the garden of Arunasura. Chanda & Prachanda, the ministers of Arunasura told about her beauty to their master.In order to marry her,he approached Mohini. She did not hear his request and teased him for fleeing from the war field of being scared of the lady who killed his masters Shumbha & Nishumbha, he became fierce. As he wanted to take her by storm,she eventually disappeared inside rock.As he broke the rock with his sword, suddenly, a vast stream of bees emerged from the rock and started to sting him. Devi herself took the form of a big, furious bee, ‘Bhramara’ and stung him repeatedly till he died. The Devas and the sages gave her holy bath, “Abhishekham” led by Jabali with tender coconut of the Kalpavriksha of Devaloka. They prayed her for blessing the world with ‘Soumya Roopa’ (tender posture).

This festival falls in the month of April and is celebrated for 8 days with unique feature in each day.

The Temple flag is hoisted on Mesha Sankramana. That begins the proceedings of the annual festival, an eight –day-long celebration on a grand scale.

Festival of lights is celebrated on the day of Kartika Bahula Panchami.

The festival of the spike of corn

In the Hastha Nakshathra accruing in the bright fortnight of the Bhadrapada month this unique festival of celebration prosperity and well-being is observed.

Other fairs and festivals that are celebrated at Kateel Durga Parameshwari temple are Navarathri Pooja, Astabhandha, Vasanthotsava, Brahmakalashotsava, Simha Sankramana and Nagamandala.

Free meals called the annadhanam is provided to the devotes twice a day,by the temple authorities.

The nearest Air terminal is at Bajpe about 16kms from mangalore, which is an international Air terminal. There is new Mangalore Port Trust that has been helping the people here for the transport of goods to and from Mangalore.

The district is well connected to other places by road, railways, air and even through water. The district has developed very good transport system as both Government and Private bus services have been flourishing here. All nooks and corners of the district could be reached by bus. The district is passed through NH 48 and NH 17 and this connects the district to other major towns in the country. Other state routes and special bus services make the public life lively here. The private bus services started plying to the places where the Government could not reach, thus helping the public to reach their destinations.