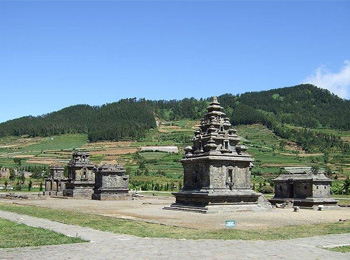 Wonosobo in Central Java Indonesia holds a place known as Dieng Volcanic Complex where the Dieng Plateau (Marshy) forms the floor of a caldera complex. The plateau holds eight small hindu temples (which were said to be as many as 400 but only eight remain) from the Kalinga Kingdom. The temples are believed to be built in the 7th or 8th century AD and are the oldest known standing stone structures in Java however, the dates of establishment still remain unclear. The temples receive their name from the Hindu Epic Mahabharata.

Dieng is located about 2,903m above sea level and its poisonous effusions and sulphur coloured lakes make it a place worth the Hindu religious tribute. The temples are dedictaed to Lord Shiva and are small shrines built as monuments to the god ancestors. The shrines according to Indian religious texts are miniature cosmic mountains although another study revels little connection in both.

The temples belong to the Dravida and Pallava style temples of South India according to the review published by Romain in 2011. Going by the records the temple was abandoned after volcanic eruptions went common in central Java, the poisonous effusions are now debated to be volcanic activity as a theory yet to be established.

How To Reach Wonosobo