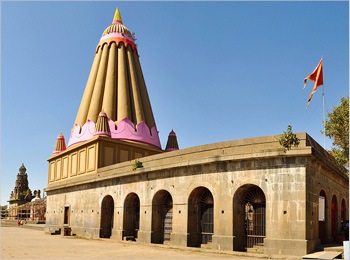 It’s called as ‘Dholia’ because of the big size of Ganesh statue. It is 10 feet tall and 8 feet wide. In Marathi language ‘Dholia’ means huge or fat. The Ganesh statue is in sitting position and looks very happy and positive.

One of the unique features of this temple is the ‘fish shape’ given to the back of the temple. This is done to protect the temple from floods in Krishna River. The fish shape of temple back divides the water current and reduces the water pressure on the temple and thus protecting it from floods.

Many people strongly believe that whatever you pray in this temple gets fulfilled.

Wai does not have a train station. Nearest option is Wathar.

One can easily get regular buses to Wai from other major cities.