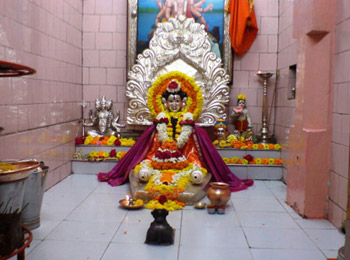 Adumbar, a small village in Sangli District is famous for the shrine of Sri Dhattatreya which is situated on the bank of the Krishna River. Sri Dhattatreya, a universal Guru, is an avatar of the divine trinity of Lord Brahma, Lord Vishnu and Lord Maheshwar. Sri Dhattatreya is worshipped by Hindus, is one of the oldest deities. The temple in Adumbar is said to have been erected in honour of Sri Narasimha Saraswati, who was a great saint and who is supposed to be the second Avatar of Sri Dhattatreya. His greatness has been extolled in Sri Guru Charitra written by Gangadhar Saraswathi. All the devotees of Lord Dhattatreya treat Sri Dhatta Kshetra Adumbar with similar respect as those of other places of Lord Dhattatreya like Ganagapur and Narsoba Wadi. 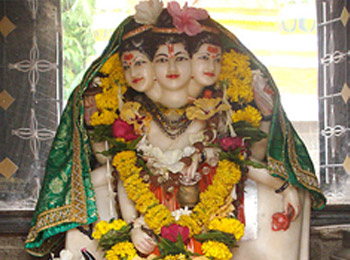 This place is overgrown with Adumbar trees. As per vision from Lord Dhattatreya to Sage Bramhanand of Girnar, he discovered and renowned this divine holy place Adumbar where Dhatta Avatar Narasimha Saraswathi performed Chaturmaas Anushtan (Four holy months). The identity of Narasimha Saraswathi having been known, thousands of people began to flock to the place for dharsan. At the end of Chatur (fourth) month, when the sage prepared to leave, the people requested him to stay. The outer mandap (hall) is of very recent construction. The shrine is situated at a lovely spot on the banks of the Krishna.

The story goes as follows. Narasimha Saraswathi was born in a poor Brahmin couple, Madhav and Amba, in about 1304. Even after his thread ceremony, he could not recite any of his lessons and so faced a lot of insults from his elders and teachers. So he left his home and came to Adumbar on the bank of the Krishna and prayed to Goddess Bhuvaneswari for three days and nights without taking any food.

But the goddess remained unmoved by his severe penance upon which he cut off his tongue and laid it at her feet. Taking pity the goddess advised him to go to Adumbar and pray Narsimha Saraswathi swami. The boy taking the command and went to Sri Guru and falling at his feet. He received the blessings of the Swami and became a scholar.

Morning pooja is performed in Dhatta temple and Nyvedya (offering) is offered followed by Aarthi. In the afternoon, Mahapooja and Aarthi are done. The day ends with evening pooja and Aarthi with Prasad distribution.

This is a glory of place where people are blessed by knowledge and are freed from their troubles.

Adumbar is well connected by road. From Mumbai to Adumbar the total distance is 400 km.