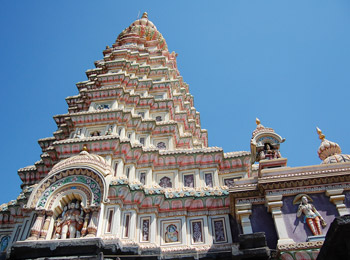 The Yamay Devi Temple is situated in a hill in the town of Aundh, Satara district, Maharashtra, India. It is said that Goddess Mahalakshmi and Lord Vishnu called her as "Ye Mai" ("Come mother" in Marathi). Hence, she is known as Yamay Devi. The top of the hill can be reached using steps that start at the bottom of the hill or by car on a rather perilous road. On navrathri festival, huge crowd of devotees visit this temple. 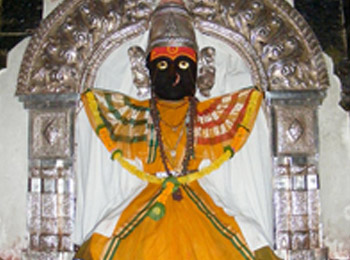 The deity is the family deity for a large number of Marathi families. The top of the temple has idols of various Hindu deities. The town and the temple have been associated with the Pant family for many centuries. The complex also houses the Sri Bhavani Museum established from the private collection of the Maharajahs of Aundh. The museum also has paintings by 19th and 20th century Indian artists like M. V. Dhurandhar, Baburao Painter, Madhav Satwalekar and Raja Ravi Varma as well as the noteworthy Mother and Child stone structure by the British sculpture, Henry Moore.

The idol of Devi Mahishasura Mardhini Yamay in black stone is almost 2 meters high. The deity is in a cross-legged sitting posture. She has four hands and is carrying gada (mace), arrow, trishul (trident) and paan patra (betel leaf). It’s a big life size statue and looks very beautiful.

A demon called Aundhsur was troubling the people and sages of this place. After they prayed to the goddess, she killed the demon. That is how the town was named as Aundh.

Another legend tells about the test by Lord Rama taken by Goddess Parvathi. When Sita was abducted by demon king Ravana, Lord Rama was in lot of pain and anguish and was searching Sita everywhere along with Laxmana. Seeing this, Parvathi thought that how can Rama be an incarnation of Lord Vishnu. Lord Shiva told her that Lord Vishnu is aware of his reality and he is just playing the character of Rama. Right now Rama should feel sad. So he is feeling pain otherwise he is totally still and is in bliss.

Parvathi could not accept this fact and she decided to test Lord Rama. So she took the form of Sita and appeared in front of Lord Rama. Seeing Parvathi, Lord Rama immediately recognized her and addressed her as mother. Parvathi realized her mistake and blessed Rama.


The nearest airport is Lohegaon Airport in Pune.


Satara is well connected to other major cities by regular buses.