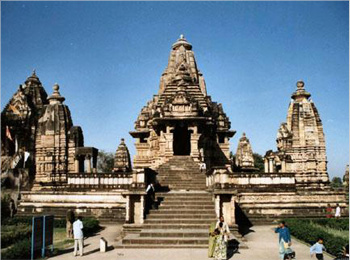 The Devi Jagadambi Temple is located in Khajuraho and is dedicated to Devi Jagadambi. The third temple on the common platform is slightly older than the Kandariya Mahadev and of a simpler, three-part design. It was probably originally dedicated to Vishnu, but later dedicated to Parvati and then Kali. Some disciples believe it may still be a Parvati temple and that Kali image (or Jagadamba) is actually an image of Parvati, painted black. 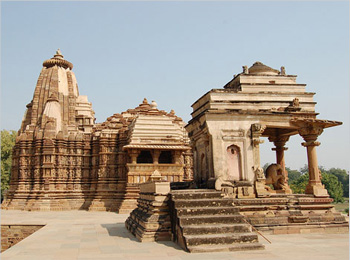 The sculptures around the temple are again in three bands. Many of the two lower band images are of Vishnu with sardulas in the inner recesses. But on the third and the uppermost band the mithuna again come out to play.

This temple essentially resembles the Chitragupta Temple in respect of design, dimensions and decorative scheme and the two temples, therefore, are quite close to each other in time as they are in space. It consists of a sanctum without ambulatory, a vestibule, a 'maha-mandapa' with lateral transepts and an entrance porch.

The garbha griha now houses a huge image of the Goddess (Devi) of the Universe (Jagdambi), though it most probably started out as a Vishnu temple. It has the usual three bands of sculptures around it, but the third and most uppermost of these showcase some of the most erotic sculptures in Khajuraho. This is much smaller than the magnificent Kandariya Mahadev Temple. lt has a cross plan with only on set of balconies, only one mandap and no inner pradakshina patha. However, the Devi Jagdambi Temple has some of the loveliest sculptures ill Khajuraho, and because of its medium height most of them are easily visible. There are wonderful representation of the dlihpolas in tlheir rightful places, the awesome Yama and Nirriti on the south and southwest sides are especially noteworthy. The little niches on the south, west and north sides have endearing images of Vishnu, Shiva and Brahma embracing their consorts. The south side lower niche has an image of Varaha, depicted with a human body and a boar head, emerging from the primeval waters carrying the earth goddess Bhudevi on his arm. She has placed her hand affectionately on his snout as if to pat the boar and thank him for rescuing her. Apart from the normal repertoire of female figures applying make-up and preening themselves, there are a number of depictions of lovers embracing and these are tucked away in the recesses and shadows of the temple. lt is as if the Devi Jagadambi and the Chitragupta Temples were especially assigned to honor love and conjugal harmony, with figures of the divine couples and others depicting every mood of love. A recess on the south side depicts a woman who , limned upon her standing over, as a creeper climbs a tree , to kiss him fervently. On the Pest sidle top row, is a mischievous woman tugging at the lover's beard. There are several such depictions and each visitor soon identifies his or her favorite masterpiece. On the west side are most facinating sculptures, one depictling a woman with her beautiful back turned to the onlooker. She is preoccupied in gazing at her beauty in the mirror, her scarf falling over her shoulder most provocatively. Near her is another seductive woman with a beautiful figure is depicted. 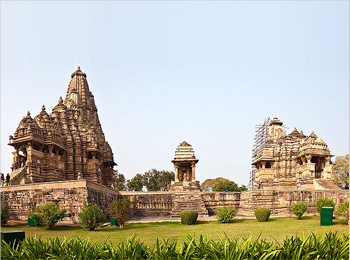 Khajuraho city is very well connected by Jhansi, Orchha, Satna, Katni, Bandhavgarh, Chattarpur etc. Usually tourists arrive at Jhansi Railway Station by train and take taxi car to travel to Khajuraho, via Orchha or directly. From Jhansi, Khajuraho is just 200kms.04:00hrs. Similarly those who are arriving at Satna railway station can hire taxi from here to reach Khajuraho by road. Similarly those who want to reach Khajuraho from Bandhavgarh, they can travel by road via Katni-Pawai-Amanganj-Panna of 240km/05:00hrs. 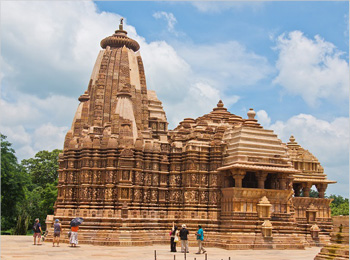 Those who are coming from Mumbai/Kolkata can reach Satna Railway Station to travel Khajuraho at a distance of 130kms/02:30hrs. If you visit Khajuraho from Jaipur than DAYODAYA EXPRESS (2182) will be the most suitable train to reach Katni and then by taxi reach Khajuraho. Distance from Katni to Khajuraho is 180kms/04:00hrs.

Those who wish to travel Khajuraho from Agra, can take any train for Jhansi Railway Station and then drive through Taxi via-Orchha/directly to Khajuraho. 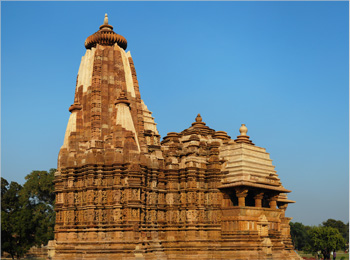 Khajuraho is having a domestic airport known as City Airport Khajuraho. It is located at 2 Km south of Khajuraho town. At present (as on 05/05/2010) flights from Delhi & Varanasi are operating for Khajuraho. Arrival/Departure are usually take place in afternoon for these two destinations. Work is going on to enhance the capabilities of Khajuraho Airport.