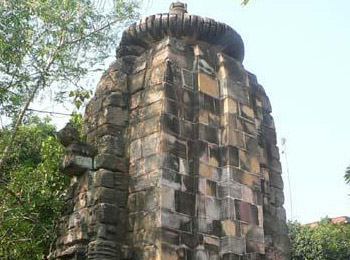 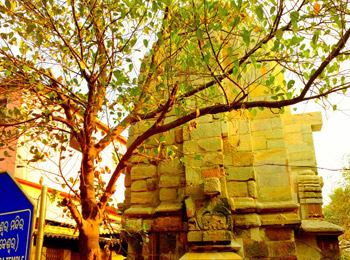 The temple is surrounded by residential buildings and market on three sides and the road on the south. The temple has a tower with a renovated porch, facing east. The presiding deity is a ling within a circular yoni-pitha inside the sanctum. The temple still holds daily rituals as per norms.

On plan the temple has a tower with a frontal porch. The temple is on a low platform which is now buried. The temple is devoid of any sculptural embellishment. The threshold holds a Gajalakshmi seated in padmasana on a full blown lotus. At the base of the right door there is a dvarapala niche decorated by a stylized motif. The niche showcases a shaivite dvarapala holding a trident. The left door is a simple plain renovated stone with absolutely no decorations. Above the door there is an architrave containing intricately carved nava-grahas seated in padmasana. One of them, Ketu is depicted with a snake’s tail and with hands upraised in sincere devotion to the Lord.

Bhubaneswar Railway Station is the main railway station of the city.

Bhubaneswar is well connected to other major cities of the country via regular buses.