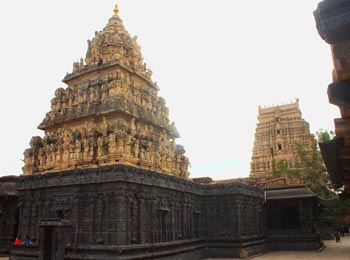 Sri Chintala Venkata Ramana Swamy Temple is noted for its architectural splendor on stones. This temple is one of the marvels of architectural splendor. The temple dates back to the period of Vijayanagara dynasty. The temple has an impressive Rajagopuram. This temple is said to have been built by Thimma Naidu, son of Ramalinga Naidu. Ramalinga Naidu was the feudal lord of the Vijayanagar Kingdom. It was built during the same time as the Vittala Temple of Hampi, in a similar manner. Most of the features of these two temples bear close resemblance to each other being built on a similar ground plan. Tadipatri is home to two famous temples one is Sri Chintala Venkata Ramana Swamy Temple and Ramalingeshwara Swamy temple. These two temples are situated on the banks of Pennar. The temple complex is strewn around with sculptures carved on rocks. The sculptures remind one, of the pastimes of Vijayanagara Empire. How arts and sculpture flourished in this era. mukhamatapa has 40 pillars with ornately decorated in intricate patterns and images; heavily decorated pillars; beautiful chariot carved in stone; amazing outer walls with sculptures and patterns; the ancient weigh scale and pillar. While the stone chariot here is compact and small in size, the famous stone chariot at Hampi is equally and amazingly detailed.

These amazing sculptures breathing life depict the stories from epic Ramayana; The story of Hanuman, His adventures in Lanka and meeting Sita Devi Lord Krishna in the form of Balakrishna killing Pothana and Lord Krishna playing on flute Lord Ananthashayana with His Consorts; Vamana depicted as Trivikrama with 3 legs – one on earth, second raised in heavens, and third on king Bali’s head.

The nearest airport is in Puttaparthi. The nearest railway station is in Tadipatri. Buses are available from all places in Andhra Pradesh and Telangana, Bangalore, and Chennai to reach this temple in Tadipatri town of Anantapur.