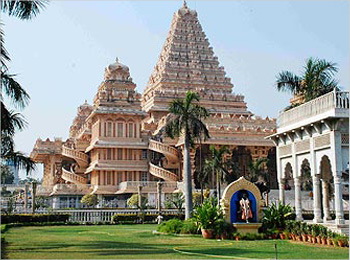 The Chhatarpur Temple is also called Shri Aadya Katyayani Shakti Peetham is located in a down town area in south of Delhi - Chhatarpur. It is dedicated to Goddess, Katyayani and is located at Chhatarpur, on the southwestern outskirts of the city of Delhi and is just 4 km (2.5 mi) from Qutub Minar, off Mehrauli-Gurgaon road. This temple was considered as the biggest temple in India and second largest in the world, before the Akshardham Temple was created in 2005 in Delhi. 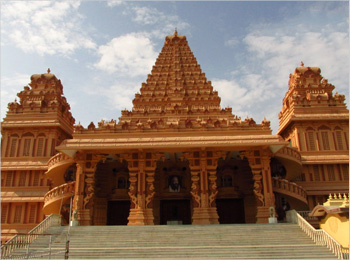 The temple was established in 1974, by Baba Sant Nagpal ji, who died in 1998. His samadhi shrine lies in the premises of the Shiv-Gauri Nageshwar Mandir within the temple complex. This temple is totally constructed from marble and on all the facets there is jaali (perforated stone or latticed screen) work. It can be classified a vessara style of architecture. The entire temple complex spread over 60 acres (24.3 ha), has over 20 small and large temples divided in three different complexes. Erected in white marble, the main shrine is dedicated to Goddess Katyayani (a form of Durga). The main feature about this temple is that its construction doesn't seek any end.

The structure of this temple gives the tint of South Indian style of architecture. Sprawling over a large area of land, Chhatarpur Mandir encompasses many structures that are made for different activities. In the temple complex, there are beautiful gardens and lawns that leave a soothing impact on the souls of the devotees. The carvings of this temple are really worth admiring. The massive size of the temple complex creates a feeling of awe. The image of Katyayani Devi is placed in a big hall, which can also be reached from the hall of prayers. The gilded image of Goddess Katyayani is always festooned in rich clothes, striking jewelry and a heavy garland of flowers. During the time of Navratri, the temple is thronged by thousands of people. To control such massive crowd of devotees, serpentine queues are made ranging in kilometers. Innumerable security guards are kept to manage the functioning of queues.

Near to the shrine of Katyayani Devi, there are two rooms that are meant to Goddess' rooms. One room is made as the living room with tables and chairs made in silver. The other room is regarded as the 'Shayan Kaksha' (Bed Room), where a bed, dressing table and table are carved in silver. The royal appearance of the rooms, make one to ponder over the appearance of heaven. Inside the complex, there are several shrines that are dedicated to Lord Shiva, Lord Ganesha, Radha-Krsihna and Lord Rama respectively. Apart from the shrines, a massive structure has been constructed where 'Bhandara' (Food is offered to people) is conducted on a daily basis. Almost for 24 hours, various religious prayers and discourses are held in the temple. On the main entrance, there is an ancient tree that is covered with holy threads. People tie threads or bangles to this tree with the belief that their wishes would be fulfilled. During the festive celebrations of Navratri, thousands of devotees come to visit this temple of Chhatarpur. Succinctly, Chhatarpur Mandir is an important temple, unfolding the religious legacy of India. 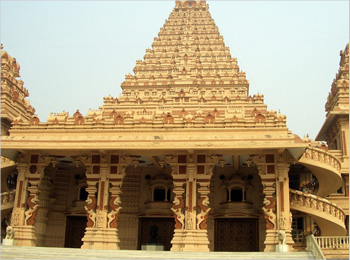 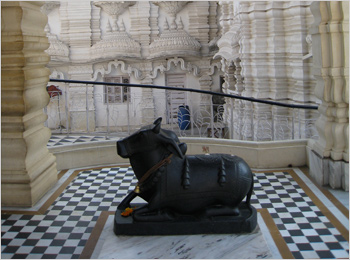 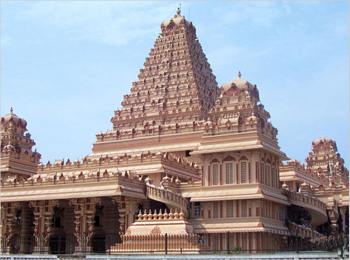 Prior to the construction of the Akshardham Temple in 2005 in Delhi, Chhatrapur Temple was the biggest temple in India and second largest in the world.

The nearest Domestic Airport is Khajuraho Airport, roughly 45 minutes drive from Chhatarpur. It is well connected to a spectrum of cities like Varanasi, Delhi and Agra. The nearest International Airport is Bhopal Airport, roughly six hour drive from Chhatarpur. Frequent Flights to various national and international destinations take off from here.

One can easily reach Chhatarpur Temple by taking local Buses, metro, auto rickshaws or by hiring taxis from Delhi