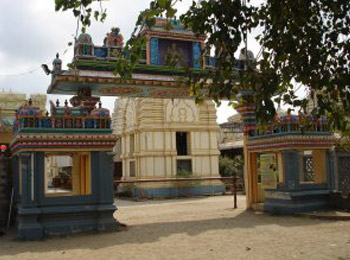 The Chennai Om Sri Skandasramam is a Hindu shrine situated at the Kambar Street of Mahalakshmi Nagar in the Selaiyur locality of Chennai. The temple is situated about 2 km from the Mahalakshmi Nagar bus stop, which lies on the Velachery-Tambaram main road.

Chennai Om Sri Skandhashramam temple was consecrated by Swami Santhananda on 24 June 1999. Sri Shanthananda Swamigal is also credited to have built the Judge Swamigal Adhishtanam at Pudukkottai, Om Sri Skandasramam at Salem and Dattagiri at Sendamangalam be for constructing this shrine at Selaiyur. The shrine is primarily devoted to Goddess Ugraprathyangira Devi and Lord Sarabheswara. This shrine holds the unique distinction of being the first temple in India dedicated to Goddess Ugraprathyangira Devi. The town of Thirubhuvanam, near Thanjavur houses an ancient Chola temple dedicated to Lord Sarabheswara, while this temple is a more recent shrine dedicated to the Lord. However, Swami Santhananda is believed to have attained heavenly abode even before the completion of this temple.

The temple houses large life sized statues of various gods and goddesses, some of them which are really huge. The meditation hall lies near the forecourt in front of the sanctums. The hall also has the the Maha Meru (Sri Chakra) at its center.

Sri Panchamukha Heramba Ganapathi is seated on a simha vaahana (lion vehicle). The deity has five heads, with four faces facing the four directions while the fifth one faces the sky. The Lord appears with ten arms and is seen holding a noose, goad, rudraksha garland, pounder, battle axe and a cord. The sanctums of Sri Bala Ganapathy and Lakshmi Ganapathy are also situated next to this shrine.

Sri Kamala Siddi Vinayaka appears sitting on a lotus holding a flower, mango, sugarcane and Parasu in his four arms. The deity also holds a Kalasam in his trunk. The sanctum of this deity is situated to the right of Goddess Bhuvaneswari’s shrine. The vigrahas of Sri Yoga Ganapathy and Uchchista Ganapathy are also found around this shrine.

Goddess Parvathi is seen gracing here with four arms, the lower ones with abhaya and varada postures, while the upper arms holding the noose and angusam. There are also vigrahas of Dasamahavidya deities, namely, Kali, Tara, Shodasi, Tripurabhairavi, Cinnamastha, Dhumavati, Bagalamuki, Rajamathangi, and Kamalathm around this sanctum.

There is a separate shrine dedicated to saint Shantha Nandha Swamigal who is credited to have built this temple. The saint’s shrine is found to the left of Goddess Bhuvaneswari’s sanctum.

The shrine of Lord Sri Panchamukha Anjaneya is located at the vaayu moolai (northwest corner), just opposite to Lord Sanishwara. The idol of the deity has five faces, with each face representing a different deity. Lord Hanuman faces the east, Sri Narasimha faces the south, Garuda is seen facing the west, God Varahaa faces the north while God Hayagriva at the top. The statues of Bhakta Hanuman and Veera Hanuman are consecrated around this sanctum.

Lord Shiva graces here as Lord Sarabeshwara. The Lord is seen with a lion’s face and bird’s wings. The two wings of the Lord have Goddess Prathiyankara and Goddess Soolini. The Lord is seen holding a deer, battle axe, snake and fire in the arms while Gods Bhairava and Agni are found residing in his abdomen. The idols of Ashta Bhairavars—Achithanga, Ruru, Chanda, Krodana, Kabala, Unmatha, Bheeshana, Samkara, and svarnakarshana are found around the sanctum.

There is a separate shine for the planet Shani Bhagvan who graces here in the standing posture. He is seen placing one of his legs on his crow mount, while the other leg is firmly placed on the ground. This shrine of Lord Shanishwara is situated on the easanya moolai (northeast corner), opposite to the shrine of Sri Panchamukha Hanuman. Various forms of Lord Sanishwara are installed around this sanctum.

The Murugan Sannidhi is located opposite to the Goddess Bhuvaneshwari sannadhi. Various idols of Lord Murugan as found in the Arupadai veedu temples (Swamimalai, Tirutani, Tiruparankundram, Palani, Pazhamudircholai, Tiruchendur) and the one at Kadirkamam are found around the sanctum. The deity’s forms of Balamurugan and Subramanya swami are also installed.

Idol of God Dattatreya with three heads and six hands holding a trident, rosary, lotus, discus, conch and a water pot is seen, installed in the agni moolai (southeast corner) opposite Panchamukha Heramba Ganapathy. Idols of Gods Brahma, Vishnu and Shiva are installed around this sanctum.

The Idol of Goddess Atharvana Bhadrakali is a massive 12 feet image seen sitting on a lion. The goddess is lion faced with four hands bearing a noose in the form of a snake, trident, hand-drum and bowl (kabaala paathram). She also appears wearing a garland of skulls. This deity’s shrine is located facing the sanctum of God Veera Sarabeswara. The statues of Navadurgas, namely, Sailaputri, Brahmacharini, Chandrakande, Kushmande, Skandamatha, Kathayayini, Kalarathri, Mahagauri and Sidhithathri are installed around this sanctum. The idol of Soolini Durga which is installed at the feet of Ugra Prathiyankara Devi is a three feet tall image, made of panchaloha. Goddess Soolini represents Goddess Durga with eight arms and is seen riding her lion.

The Chakra Piorna Maha Meru is the personification of Goddess Sakthi and is established right at the centre of the hall.

The temple has an Ayyappa Sannidhi where the Lord is seen in a sitting posture, with the right hand showing the gnana mudra and the left one showing the vara mudra. This shrine faces the east and is opposite to the Astadasabhuja Durga. The idol of Kanni Moolai Ganapathy is installed to the right

Idol of Goddess Parvathi’s incarnation mounted on a lion, with her 18 hands holding various weapons, including the trident of God Shiva, the discus of God Vishnu, the conch of Varuna, the bow and arrows of Vayu, and the vajra of Indra. Installed in the southern part of the temple, behind the Sahasralingam, facing the north

Idol of God Shiva in lingam form, Weighing 20 tons, the idol has 53 lingams in each of the 19 lines making a total of 1,007 lingams carved within the main lingam and is accompanied by a Nandhi (the bull) measuring 5 feet long and 4 feet high. Around this sanctum are the idols of God Dakshinamurthy, God Venkatachalapathy with Goddess Alarmel Mangai and God Brahmma.

It customary to begin anything new with a pooja to Lord Vigneswara. Special Abhishekams and poojas are performed for the Pancha Mukha Heramaba Ganapathy and the Kamala Siddhi Vinayakar here on the Chaturti thithi falling every month. The annual Vinayaka Chaturti festivals is an important day of worshipping Lord Ganapathi here. Modakam, Arukampul, Erukan flower, coconuts, milk are offered to the deity on these special days.

Other than the daily Prathyankira Sarabha Sulini Homam, special abishekam is performed to Goddess Pratankira Devi on every Amavasya (New Moon day). Special Poojas and Abhishekams are performed on the Fridays of the Tamil months of Aadi & Thai. The revered Adi puram, Navarathri and Deepavali we the other festivals celebrated here. Lemon and red coloured flowers are offered ava Prasad to the devotees apart from the sacred Kunkuma.

The Prathyankira Sarabha Soolini Homam is conducted on all Sundays during Raghu Kala. The performance of this Homam is believed to eradicate all the evils from this world. A special Abhishekam is also performed to Lord Veera Sarabeswara after the Homam. The Pradoshas days are considered auspicious for the worship of Lord Veera Sarabeshwarar. Anna Abhishekam is also performed to the Lord on the Amavasya (New moon) in the Tamil month of Aippasi.

The occasion of Chitra Pournami is considered auspicious for the worship of Matha Bhuvaneshwari to whom special Abishekas and Alankaras (dressing) are done. Apart from this day, all the Fridays in the Tamil months of Aadi & Thai, Sundays of the Tamil month Avani, the revered Adi puram festival, all the Pournami (full moon day), the nine day long Navarathri festival and Deepavali are also considered holy for the worship of this deity.

Various Abhishekams and poojas are performed to Sri Swaminatha Swami during the Karthikai star that falls every month. Other auspicious days like the Panguni Uthiram, Skanda Shashti and Vaikasi Vishakam are also grandly celebrated here. The festival of Kartigai Deepam is one of the most prominent festivals celebrated here.

The much revered Mahasivarathri is as major festival celebrated in this temple. Special abhishekams and pujas are performed for Lord Shiva here for the four kalams apart from the pradosham which falls twice in a month. The Vilvam leaves are also offered to the Lord which is considered auspicious for his worship.

Devotees worship the goddess with Garlands made up of lemon, arali flowers, Lemon. Rahu Kaala abhisheka is performed to the deity other than lighting lamps with ghee or oil on every Tuesdays and Fridays (3 –4.30 pm and 10.30 –12.00). Poojas are also performed on Tuesdays and Fridays of the Tamil months of Aadi & Thai, Adi puram festival, Navarathri and Deepavali.

Lord Dattatreya is considered as the Adi Guru and hence special poojas, abhishekams on Guru Varam i.e., Thursdays are performed apart from the Datta Jayanthi festival and during chaturmasya.

Guru Shantananda Swamigal is a divine saint who shows the path of knowledge and wisdom. Special poojas are performed for the holy saint everyday apart from Thursdays. Guru aradana is also conducted during the chaturmasya.

700 slokas constituting the Durga Saptha Sathi in praise of Goddess Chandi Durga (who is the personification of Mahakali, Mahalakshmi and Mahasarasvathi) are recited at the temple every day.

On the me year eve of January 1st every year, special Homam is performed in this temple seeking world peace and wellness of people around the world.

How To Reach Chennai

Chennai has a well developed Railway network connecting the city with rest of India. Railway Station(s) such as Perambur (PER), Tambaram (TBM), Chennai Central serve as the main railway stations of the city.

Chennai is well connected to other major cities of the country via regular buses. Bus Station(s) - Panambur