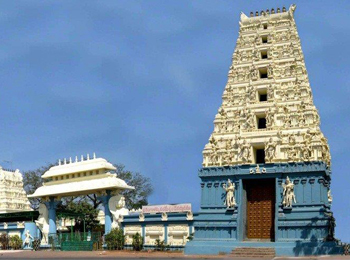 Goddess Chengalamma Parameswari manifested Herself in Sullurpeta, which is near Nellore. History shows us that it was established during the fourth and fifth centuries. People also refer to her as the village goddess “Tenkali”. With the passage of time, she is being worshipped regularly by devotees as Chengalamma. Devotees turn up in large number to witness “Chengalamma Jatara” (fair). The Village goddess who was called Tankali gained reputation as Sullurpeta Chengalamma Thalli and her idol in the temple faces the sea. Devotees from different parts of the State visit the place and fulfil their vows, referring the goddess as the mother who grants boons liberally. The naturally-formed image of the goddess adorning the hanging roots (vooda) of the banyan tree is really an awe-inspiring spectacle.

Chennai has the nearest airport. One can reach temple easily by train. The closest railway station is in Chennai. The temple is also well connected by road as well.