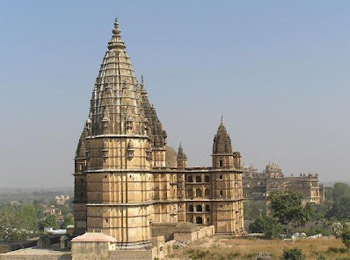 Chaturbhuj Asthan Temple is situated in the city of Muzaffarpur, Bihar. The temple is well know for the faith and belief that the people have on that god. The presiding deity is Lord Chaturbhuj. The idol is believed to have been discovered in the year 1303.

The idol of Lord Chaturbhuj was found in a village called “Turki” in the year 1303 after which the people of that place started worshipping the Lord. Lord Chathurburj is said to have appeared in the dream of a saint from a far away village who had established a Shiva linga at the present day Muzzafarpur, which was then only a village. Lord Chaturbhuj had asked the saint to place him near the Linga of Lord Shiva as he was not comfortable at Turki. The saint brought the idol, all the way from Turki to Muzaffarpur, on foot, which was a reflection of his faith and belief. Lord Chaturbhuj was established beside Lord Shiva, as desired, and is since then being worshipped by the devotees.

Legend also says that there was a childless man from Patna, who was another staunch worshipper of Lord Chathurbuj . The Lord had appeared in his dreams and had asked him to build a temple for him. By doing so, he would be blessed with a child and will rise to immense fame. The man was moved by the Lord’s gesture and immediately built the beautiful temple of Lord Chaturbhuj in Muzaffarpur.

The Patna Airport is the nearest airport to this temple.

Muzaffarpur is well connected to most of the other towns and cities of the state. One can definitely reach the place through public and private buses.