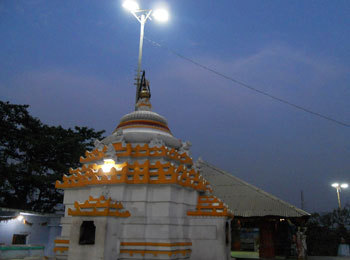 Overview : Charchika Temple is goddess Chamunda temple located in Orissa.Goddess is locally known as Maa Charchika Devi.It is one of the oldest Shakta places in Orissa.It is supposed that the Charchika idol was set up by Parashurama. The temple consists of a pidha vimana, jagamohana and a wooden mandapa known as "sunyavahini mandapa" of Kalingan order. Temple is constructed using stones and the whole surface is thickly lime plastered and white washed. The mandapa has a wood ceiling which is profusely carved and painted.The pillars are in stone. The ceiling of the mandpa has episodes from Bhagavata Purana with prevailing decoration of animals and birds like - elephant, duck, parrot, peacock, etc.Lotus medallions, floral motifs, scroll and jali works are engraved. Images of animal hunting,gaja-vidalas, horse ridermakaramukha,mithuna and maithuna are also present. The parsvadevata niches treasure four-armed Chamunda on the north, four-armed Mahisasuramardini Durga on the west and an eight-armed Chamunda on the southern side. The Renuka river in Orissa was created due to a flood inundated in 1982. As per the legend, a devotee who worshipped and pleased Maa Charchika stole all of her ornaments to build a house at the current site of the Renuka river. Maa Charchika, in anger created the Renuka river to punish him. She is settled on a prostrate human body, wearing a garland of human skulls. She has khadga, shula, katari and varadamudra in her four right hands while the four left hands represent severed head, blood-cup, ‘’damru’’ and leaving a finger of the remaining hand soaked in blood.