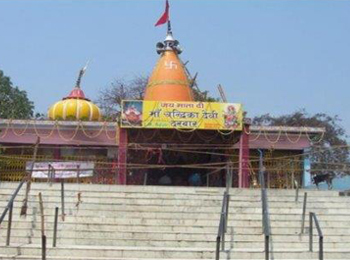 Chandrika Devi Temple is one of the sacred temples of the Hindu god Chandi in the city of Lucknow, Uttar Pradesh, India. It is situated on the bank of river Gomti at north-west of National Highway No.24 (Lucknow-Sitapur Road) in Kathvara village, near Lucknow City. This temple is 300 years old and is well known for the deity Chandrika Devi - a form of Goddess Durga. Located in a natural environment encircled by river Gomti at north, west and south side, it is around 28 km away from the main city of Lucknow. It is about 45 km away from Lucknow Airport.

It is said that elder son of Shri Lakshmana - the founder of Lucknow, Rajkumar Chandraketu, was once passing with Ashwamegh Horse through Gomti. In the way, it became dark and hence he had to take rest in the then dense forest. He prayed Goddess for safety. Within a moment there was cool moon light and the Goddess appeared before him and assured him. It is said that a grand temple established here during that era was destroyed in 12th century by foreign invaders. It is also said that around 250 years back some nearby villagers, while roaming in the forests, located this beautiful place- which was hidden with dense forests. Next day, a villager could locate the statue of Devi and it was placed at the present place. Later on, a temple was constructed and since then people continued to visit this temple and offer 'Pooja' after knowing the appearance of Ma Chandrika Devi. This place is also known as Mahi Sagar Teerth.

It is also said that in Dwaper Yug God Shri Krishna advised Barbreek, son of Ghatotkach, about the Tirth for acquiring power. Barbreek worshiped Ma Chandrika Devi for continuous 3 years at this place.

On the eve of Amavasya and Navratras, a lot of religious activities in the temple and around the temple premises are held. People from different parts of the State, come here for Hawan (Yagya), Mundan (total hair-cut). In addition, during these days, Kirtans, satsang (religious meetings) are also held

Lucknow Airport is located around 14 km away from the city centre. Lucknow Railway Station at Charbagh is the main railway station. Wide road network connects Lucknow to major cities of India.