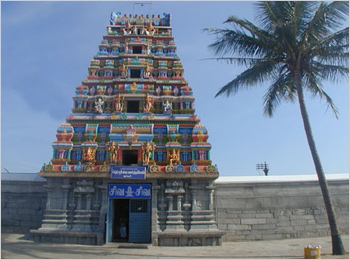 
The Maraghathambigari Chandrachoodeshwara temple is located at Hosur and is dedicated to God Shiva. This temple is around 500-1000 years old and enjoys its location on a rocky hill. This temple is also visible from miles because of its height; it is around 39 kilometres away from the city of Bangalore. This temple is one of the oldest in the Dharmapuri district. 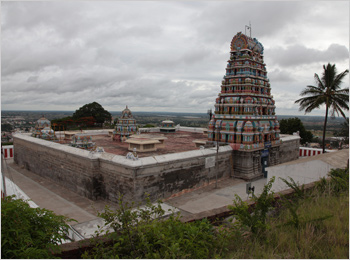 Devotees can see a noon on the head of the presiding deity God Shiva’s idol. The name of this temple has been derived from the posture of God Shiva. The meaning of Chandra is moon and as God Shiva is wearing a Chandra on his head he becomes Chandrachoodesh i.e. one who wears Chandra. Other than the main deity, the temple also has idols of God Surya, Chandra, Gajalkashmi, Ganesha, Kashi Vishwanatha and Panchalinga. Goddess Parvathi has a separate shrine and she is praised as Maragathambal in this temple. The major highlight of this temple is the linga or the Jalakanthaeswara which is located at the entrance of the main shrine and it is filled with water and various rituals take place to please him so that rain comes during the scorching months of summer. This temple though in Karnataka, is administered and is under the control of the Tamil Nadu government. The main days of this temple are Mondays and Fridays, during these days’ auspicious pujas take place thrice in a day. Other than these days, Shasthi, Pradhosha and Rudrabhisheka are also considered as very sacred and special events. During the Tamil month of Maasi, a 13 day long Rathothsava festival takes place which is attended by thousands of devotees. The hill where this temple stands actually resembles Nandi from a far distance and that is why this temple is also called as Virushapasalam. Other names for this temple include Shenbgasalam, Bathrasalam, Bhathragiri etc. The temple’s charm is enhanced by the 9 theerthas which are Maragatha, Shambavam, Macham, Sri Rama, Pandava, Shiva Gange, Hanuman and Vishnu. The hill which is present below this hill is called as Maragatha Sarovar. This famous temples presiding deity is Maragadhamba Sametha (along with) Shri Chandrachoodeshwarar (a name for Lord Shiva) and is located on the 250ft high hill top and hence is visible from Hosur city center. 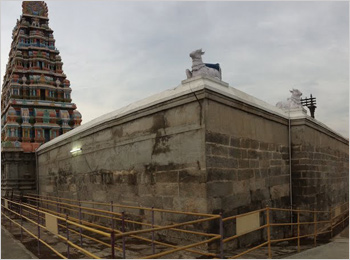 Hosur has got its name from the Hoysalas’ reign. It is known that around 127 gold coins were donated to this temple by the Hoysala Vishwanathan period. According to legend, there was a Devi who had got hurt by a demon. She then decided to perform Tapas on the banks of the Dhatchinapinakini. God Shiva was pleased by her Tapas and hence he appeared before her. She asked God Shiva for an idol of Nandi, his vehicle as a boon and she also told him for a temple to be built on that hill in the memory of this holy incident. God Shiva obliged to her demands and gifted her the idol. Hosur is known to have been founded by King Rama Nathan who belonged to the Hoysala dynasty. Hosur was found in 1290. This particular temple was built by another Hoysala King in 1260. The name of the King was Thirupuvanamalla Barvatharaja Anthiyazhvar. This temple was renovated by Azhakiya Perumal Aathimoolam. This dynasty’s rule was ended when Pallavarayar III died during the war with the then Pandya king, Maravarman Sundara Pandyan. The place Hosur and this temple are mentioned in the part of the Bramanda Puranam called Padmagiri Mahathmiyam.One of the other stories related to this place is that once there was Arul Meku Chandira Choodeshwar who was disguised as an ornamented lizard and he was coming from Kailash with his wife Maragathambal. Both of them were quite tired when they reached this place. Two famous scholars named Muthakalar and Uthchayanar were meditating here and they were able to recognise God Shiva in the disguise of a lizard. When they both attempted to catch God Shiva, God disappeared. God Shiva’s wife was quite furious and she cursed him to go deaf and dumb. After that, she prayed and meditated so that God can come back to her and hence Chandira Choodeswar reappeared before her.


Hosur is well-linked by both railways and roadways.


One can find the nearest international airport in Bangalore.


There are a numbers of regular buses that offer frequent services.