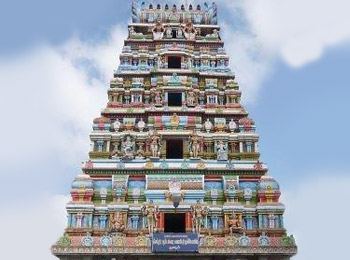 The deity of God Shiva is worshipped at the holy Chandira Choodeswaraswami Hill Temple which is located at Hosur in Tamil Nadu. This temple is situated in the Hosur Talkul of Krishnagiri District.

As per the legend, once God Arul Meku Chandira Choodeswarar was arriving from Kailasam with his wife Maragathambal when both of them transformed into a lizard. Both of them soon reached a place where they met two scholars named Uthchayanar and Muthkalar. Both of the scholars were meditating and they realized that the lizard was a God. They planned to catch the lizard and during their efforts, the lizard disappeared suddenly. Apparently, Goddess Maragathambal got angry and cursed these scholars to be deaf and dumb. After a while they worshipped and God Chandira Choodeswarar appeared in front of them.

The festival is celebrated during the month of March also known as Masi-Panguni month. The celebration is conducted for 13days and it begins with flag hoisting at the temple.

The deity of God Vinayagar is also enshrined in the temple and is known as God Raja Ganapathi. In front of the deity of God Amman, a Sri Chakram is constructed. The deity depicts God Amman without a nose ring. The clothes of the deity are beautiful along with its hairstyle. There is also a Kunjam. A water sump structure is constructed near the Jalakandeswara that appears as a Lingam. The water is poured on the Lingam through this during the prayers.

The Hosur Aerodrome is nearest to the temple and it was constructed in the year 1994. The Bengaluru International Airport is about 80kms away from Hosur.

The Hosur Railway Station is nearest to the temple and is well connected to all the major cities of the country.