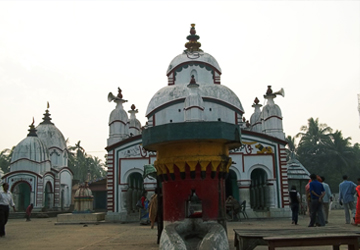 Chandaneshwar temple is dedicated to Lord Shiva. It is located at Chandaneswar, Baleswar, Odisha. A huge annual fair in the Solar New Year Pana Sankranti, the first day of the Odia calendar, is celebrated on the premises. A large number of pilgrimages from all over the country visit the temple during this period.

The Odia new year Maha Vishuva Sankranti day is very famous around the premises of the shrine. Locally called Uda Parba, also Nila Parba after worshiping Nilakanth Shiva, Chadaka Yatra. A half million people gather around the shrine and do fasting of several days to fulfill their wishes. It was built in typical Kalingan Architecture style of Odisha temples.

Chandaneswar is famous for Chandaneswar temple of Lord Siva Every year in the month of 'Chaitra' (from 14 March to 14 April) an Odisha famous "Chadak Mela/CHaitra Mela/Udaa". It continues for 13 days (13 Arghya to 1 Arghya discounting). The Bhaktas (devotees) accept paita (pabitrata). The Bhaktas with their 'manaskamana' come from all over the country. From last 5th Arghya to 3rd Arghya the Bhaktas increase more in numbers. Near about 3 to 4 lakh of Bhaktas offer their Arghyas (prayer) at night only.

They fast the whole day not even swallowing their spit. Last 4th Arghya day "Kamina Baha" (marriage of Lord Siva with Kamina, daughter of demon Nila), second Arghyaday "Nila Parba" and the first Arghya day "Paata Parbha (Mala Chandani). As per the rigorous manasik point of view some Bhaktas prick their bodies and tongues with iron nails. The whole gathering is controlled by the Paata Bhakta and Odisha Government. After the Paata Parba the Bhaktas remove their Paitas after their last Arghya and float in the sea but the fair continues another seven or eight days more. More than half million of people gather in that fair. So it is called the second Puri in Odisha.

Regular transport is available from Jaleswar in Odisha and Digha in West Bengal. It is very near to New Digha, One can go from Digha to New Digha Bus stand by bus/Auto then take shared auto /van rickshow for Temple.