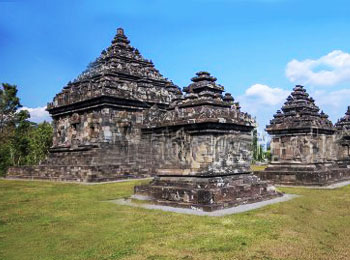 Ijo temple popularly called Candi Ijo in Indonesian is a Hindu candi (temple) situated about 4 Kms from Ratu Boko and 18 kms east from the city of Yogyakarta, Indonesia. The temple was constructed between 10th to 11th century CE during the reign of Mataram dynasty. The temple premise is located in the hamlet of Groyokan, Sambirejo village, Kecamatan Prambanan, Sleman Regency, Yogyakarta. The temple's name is derived from the place Gumuk Ijo hill, where it is situated. The temple compound stands on western slope of the hill, in the region lying east of Yogyakarta and about 4 kms southeast from Ratu Boko archaeological compound. The temple lies 410 meters above the sea level. The western part of the Gumuk Ijo hill provides a fabulous view of rice fields, village settlements and the Adisucipto International Airport.

The temple is located in an area of about 0.8 hectares. The whole premise of the original temple is estimated to be much larger than this. Many archeological artifacts and ruins are found on the western side of hill slopes till the foot, suggesting that the original temple compound might have extended from the foot till the main temple on the hill top.

The temple compound is vast, extending from the west to east. Few temple ruins were discovered on the western slopes which are still under excavation. It is identified that more than 10 Perwara or smaller temples ruins are still buried within the area.

The main temple complex is located on the top of the hill, which consists of a large main temple facing west and three perwara temples on its front, facing east. The three perwara temples were built in honor of the Brahma, Vishnu and Shiva, who are considered as gods of the highest order, according to Hinduism. All the three temples have cella or sanctum sanctorum and there are windows perforated in the rhombus shape. The roof is beautifully decorated with many rows of ratnas.

The main temple has a square layout. The entrance into the sanctum sanctorum (garbhagriha) is on west side, with two false windows on either side. The north, east, and southern walls have three niches on each side devorated with kala-makara design. The center niche is slightly higher than other two flanking niches. These niches are now empty which was once believed to have adorned the idols of Hindu deities.

The door of the main temple is 1.2m above the ground level and thus a flight of stairs aids in reaching the entrance. The top of the door contains carving of the Kala's head which are linked to the body of makaras on both sides of the gate. This kala-makara pattern is seen commonly in the ancient shrines of Java. The mouth part of the Ankara is carved with small parrots.

A large Shiv Linga surrounded by a yoni with a naga serpam is found within the main sanctum sanctorum. The union of phallic Linga and yoni symbolizes the sacred union of Lord Shiva and his consort Goddess Parvati as his shakti. There are three niches on all sides of the inner wall in the room. All the niches are flanked with Hindu lesser gods and goddesses.

The roof of the main temple has three ascending terraces, forming a stepped pyramid pattern. Three rathnas or gems are found on all sides of each step. A larger ratna is found on the center of the roof. All the edges of the roof have antefixes with floral frames, inside which are images of Hindu deities holding flowers.

Indonesia has an efficient air transport system connecting major cities around the world. The Denpasar Airport in Bali (DPS) and the Soekarno-Hatta Jakarta International Airport are the major airports of Indonesia which plies regular domestic and International flights.

Java has the best railway network, with trains connecting the capital city Jakarta with other important cities. Surabaya is connected to Jakarta through Semarang on the north coast and Yogyakarta and Solo through the southern main line. Bandung is linked to Jakarta with nearly 30 trains everyday, and is also linked to Surabaya through Yogyakarta. Bali is a popular tourist destination in Indonesia which has no railway lines, but there are trains from Surabaya to Banyuwangi, connecting island through ferry services.

Indonesia boasts of a good road network with frequent bus services plying between major towns and cities. Buses with various amenities like Air conditioning, reclining seats, etc. can be rented along with its driver for a group of tourists. Indonesian bus corporations operate intercity and interprovincial routes. The interprovincial routes usually include transportation to other islands mainly between Java and Sumatra. Long, overnight journeys are convenient, because travelers can sleep and arrive fresh in the morning to their respective destinations.