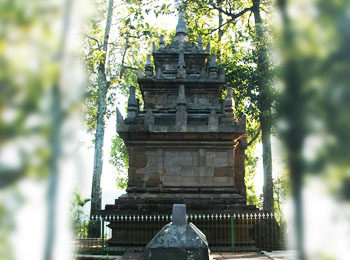 Cangkuang (known as Candi Cangkuang in Indonesia) is a relatively small Shivaist candi (Hindu temple) built in the 8th century. It is located in Kampung Pulo village, Kecamatan Leles in West Java islands of Indonesia. The temple is one among the few Hindu-Buddhist temples ever discovered in West Javan region. The other temples of that region include Batujaya and Bojongmenje temple. An ancient Islamic tomb of Embah Dalem Arief Muhammad is located 3m to the south of the temple. Embah Dalem Arief is believed to be the community leader of Cangkuang village, during the Islamization of local Sundanese people in the 17th-century.

Leles is a town located about 40Kms southeast of Bandung, en route to the town Garut. The temple is located several kilometers east from Leles-Garut main road. The temple lies in an island called Kampung Pulo which has a area of around 16.5 hectares and is surrounded by a small lake (Sundanese: situ) called Situ Cangkuang. There is a traditional Sundanese village located in the vicinity of this temple. Almost the entire area surrounding the temple, tomb and the traditional village is preserved as a cultural and archaeological site. Originally the entire island was surrounded by this lake. But now only the northern part encompasses the lake. The southern parts of the lake have been reclaimed and turned into rice and paddy fields. The name of the temple ‘Cangkuang’ is derived from the local Sundanese name for pandan tree (pandanus furcatus). This tree is generally seen growing in abundance around the Kampung Pulo Island.

The temple is built using andesite stones, facing the direction east. The base of the temple measures 4.5 x 4.5m and 8.5m high. On the eastern side, is a flight of stairs which leads to the portal and a small sanctum sanctorum (garbhagriha). The main room consists of a tiny stone statue of Lord Shiva, which is only 62 cms high. The statue is visibly damaged with broken hands and eroded face. Nandi’s head is seen carved on the pedestal of the statue. The temple is quite plain and simple with very minimal decorations. The roof is arranged in three receding steps adorned with pseudo-lingam pinnacles. The architectural style of this temple resembles those pertaining to the ancient Central Javanese Hindu temples. Archeologists have found that the temple dates back to early 8th-century AD, which is slightly older than temples of southern Central Java region like the Prambanan.

Java has one of the best railway networks in Indonesia, with trains linking Jakarta with most other towns and cities of the island with regular intervals.

Roadways form the primary means for long-distance transport of this country, with buses available in plenty to cross the islands and link every town and city. The Eksekutif buses provide comfortable travelling, with amenities such as Air conditioning, reclining seats, and even toilet. Few big cities have several bus terminals operating huge fleets of bus, linking various parts of the country.