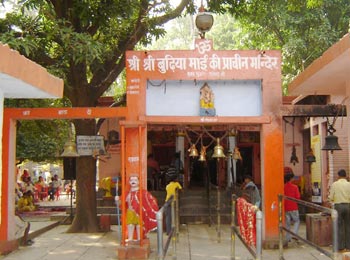 Budhiya Mai Mandir is dedicated to Goddess Durga. It is located in the dense forests of Kushmi, Uttar Pradesh India. It is about 8kms from Gorakhpur railway station. The temple was in the banks of the pond. The temple is named after the old lady Budhia Mai, who built it. The pond stands in between the old and new temple, which makes the place very scenic.

In the Garbha graha or sanctum santorum is the idol of Goddess Durga. She is seen wearing a bright red Churni and a small idol of budhia mai to its Left dressed in White sari. A large number of devotees flock the temple during Navaratri, not minding its small size. Food is cooked in the premises and offered to the deity and then the same is consumed as Prasad. The speciality is instead of offering Red Chunari white Chunari is offered to the Goddess here.

How to Reach Gorakhpur

Gorakhpur civil airport is the closest airport which is situated around 8 kilometers away from the city centre. Direct flights from Gorakhpur airport connect to cities like Delhi, Lucknow, Varanasi, and Kolkata and others.

The Gorakhpur railway station is the primary railhead and is the headquarters of North Eastern Railway. This railhead is well connected to major cities of the country such as Delhi, Chennai, Nagpur, Hyderabad, Varanasi, Lucknow and a lot more. Cabs and Auto Rickshaws can be hired outside the railway station.

There are regular buses from other major cities to Gorakhpur.