The Kamalashile Temple is a Goddess Brahmi Durga Parameshwari located at Udupi locale of Karnataka at a distance of 35 km from Kundapura. 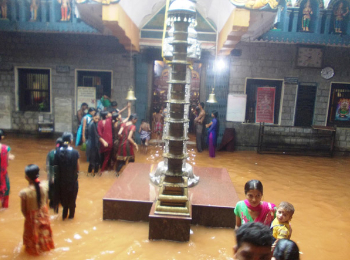 Kamalashile is located at a distance of 35km from Kundapura in Udupi district. Kamalashile is surrounded by beautiful mountains and evergreen forests with the river Kubja flowing by the side of it. Kamalashile is famous for its ancient Sri Brahmi Durgaparameshwari temple located in heart of the village. The name Kamalashile takes after the stone Linga. Goddess Sri Brahmi Durgaparameshwari is worshiped in the form of a Linga, which is said to be convergence of Goddesses Mahakali, Maha Lakshmi and Maha Saraswathi. In the year 1968, flood water from the river Kubja inundated the temple and the water level rose to about 20 feet and the wall towards the river collapsed. Later in the year 1990 the entire temple was rebuilt. Wood used in construction of the entire temple comprises a blend of Halasu and Bhogi only. A special Pooja is performed every evening called as "Salaam Pooja" as a tribute to the Muslim rulers Hyder Ali and his son Tippu Sultan and the practice has been there for a long time

Approximately 75 feet from its base to the tip &is made from 1 singletree (Bhogi Tree) which was specially selected from the banks of River Kubja. Approximately 200kgs of silver has been used to give plating to the Dwajha Stamba and it was contributed by the devotees of the temple. It was inaugurated on 2nd April 2010 and is marked as the day of Dwajharohana. 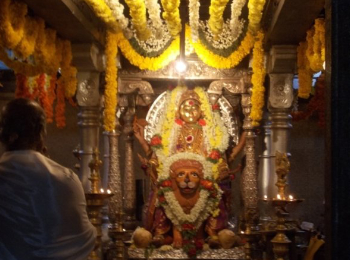 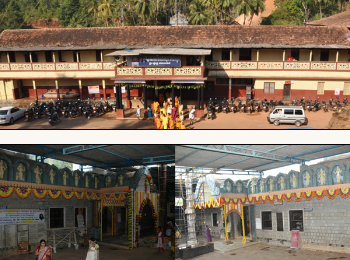 According to the Skanda Purana of Sahyadri Kanda, a Beautiful lady by name Pingala was a court dancer who performed in front of Lord Shiva & Goddess Parvathi in Kailash Mountain. One day because of her ego, she refused to dance and was cursed by Goddess Parvathi. She lost her beauty and was born as ugly women (Kubja) in Bhu-loka. Realising her mistake, when Pingala pleaded for mercy, Goddess Parvathi told her that She will be coming down to Bhu-Loka to put an end to all the evil deeds of Khararatasura and she will be showing up in the form of Linga in front of Raikwa Rushi ashram in sahyadri forest and the linga will be in the form of Kamalashile. Goddess Parvathi told Kubja to go near suparshwa cave and do penance till goddess gives her moksha. Later Pleased with Kubja, Goddess Parvathi appeared in the form of Kamalashile (linga) at the Sangam of River Kubja & Naga theertha in front of Raikwa Rushi ashram. Kubja was told to go to Mathura and wait for Sri Krishna and she would get relieved of her curse by the touch of Lord Sri Krishna. Goddess also told her that the river which originates from sahya forest & flows towards western coast to be named after her (Kubja) and the river to flood every year to clean the Linga. It is said that Kamalashile (Goddess Sri Brahmi Durga Parameshwari) Linga appeared at the same time when the world was created. Initially the Kamalashile (Linga) was worshiped as Brahma Lingeshwara, Later people got to know that it was actually Sri Brahmi Durga parameshwari. In Krutha Yuga, when King Suparshwa was searching for a suitable place to do penance & get moksha, He came across this cave & found it suitable. This was the reason to name this cave after king suparsha. King Suparsha prays lord Shiva to bless him to do penance without any hurdles. Lord Shiva appoints one of his ganas Bhairava to permanently stay at the entrance of the cave to make sure that king’s penance is not disturbed.It is also said that lot of Rishi’s and Maharajas have come to this cave to do penance and one among them is Sri Sridhara Swamiji of Varadapura.This is about 2 kms from the temple on Halli Holle road.At the entrance of the cave, Bhairava swamy idol is worshiped.A liitle down in the cave towards left are the 3 separate lingas:– it is also called tri-shakti linga – kali, Lakshmi, Saraswathi.Further down towards right is the place where King Suparshwa, Adi-Shesha & Sri Sridhara Swamy did penance for months & years.A little down into the cave, one can see the birth place of Naga Theertha, which flows between rocks and joins the river Kubja near Kamalashile temple.Next further inside is the Naga Sannidi. Here there is a high dome where one can see hundreds of bats settled.

It is said that long back, fearing death from Garuda, Adishesha came to Goddess Brahmi Durga parameshwari seeking mukthi from the curse he had, Goddess told Adishesha that the only way to avoid death for him to become bed for lord Vishu & requested all other nagas to come and hide in suparsha cave so that goddess can save them from garuda A tiger comes near suparshwa cave to rest & it is a custom to light up the fire place in front of the cave for the tiger to keep itself warm.To visit Suparsha cave, do take assistance from one of the temple staff and carry a torch without fail.

Chandramana Ugadi Festival: Is celebrated on Chaitra Masa Shudha Padya day by Reading the Panchanga and presenting Purnaphala (Coconut)to the Goddess Sri Brahmi Durga Parameshwari. Brahma Ratotsava / Jatre: During Chaitra maasa - April, flag hoisting marks the starting of the annual fair. The annual Car Festival orAnnual Fair starts 3 days before Chaitra Bhahula Moola Nakshatra day and goes on for 6 days. One can see the Carvings of Ramayana and Mahabharata stories on the Brahma Ratha. It has beautiful Idols embossed on it and has 6 wheels. Special Programs and Poojas are held on all 6 days:

It is said that the vehicle of Goddess Sri Brahmi Durgaparameshwari – Tiger goes to the surrounding 7 villages and roars 7 days announcing to prepare for the annual fair.

Ekadasha Rudra Abhisheka: This is held during Shravana Maasa and to mark this occasion, Anna Santarpane is done for 1 whole month.

Laksha Deepotsava: This is a Pooja wherein 1 lakh lamps are lit in front of Goddess and is celebrated on Karthika Bhahula Amavasya.

Not animal sacrifice, Bali is a procedure of offering rice to ashta-dikpalakas of goddess around the inner quadrangle in morning, afternoon and at night.

The nearest airport is in Mangalore (125 kms.), and the nearest railway stations are in Kundapura, Mangalore and Shimoga. By road, Kamalashile is well connected by roads.