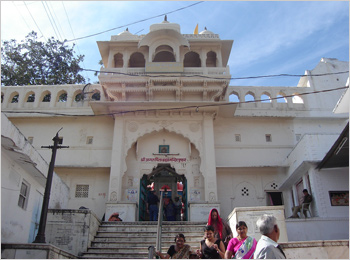 The Bramha temple of Lord Bramha is located on the banks of Pushkar Lake in Pushkar town of Ajmer District in Rajasthan, India. This is the temple of creator of the universe according to Hindu mythology and is one of the famous temples that are left of Lord Bramha in India. Devotees coming by air can come to Jaipur airport which is 138 kms from here. The place is well known hence well connected by Ajmer city to other cities like Jaipur,Agra, Udaipur,Delhi, Ahmedabad, Mumbai and Chennai via rail and road transport.

The shrine is said to be 2000 years old but the current structure of the temple is of 14th century. Predominantly built by stone and marble, the shikhara, 700 ft high is red in colour and a swan symbol adorn the main gate of the temple structure. In the inner sanctum is the idol of Lord Bramha with his consort Gayathri Devi. The priests of the shrine belong to a sect who practice ascetic. Temple festivities dedicated to Lord Bramha are held each year on full moon day ( Pournima) of Karthika maasa ( October - November). The devotees attend the festivities with fervour after bathing in the Pushkar lake. 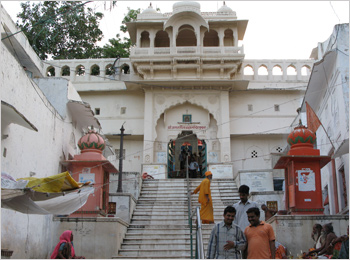 The temple is built on a raised pedestal with marble stone steps moving up to the entrance of the temple's arched gateway embellished by a tall structure of canopies. There is a mandapa( central hall) in the temple that leads to inner sanctum. In the mandapa there lies a silver turtle facing inner sanctum. The temple is built with the use of stone blocks and molten lead and the black and white marble flooring is replaced periodically. Inside walls of the temple are adorned with silver coins inscribed by devotees names as an offering to Lord Bramha. 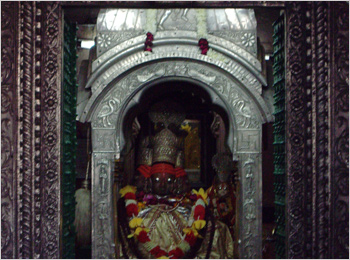 The reigning deity, Lord Bramha's idol is placed by Shri Adi Sankaracharya in 718 AD. The idol is life size with four faces( called chaumurthi) each facing all four directions and seated in a vishvakarma form ie with crossed legs on his vehicle the swan or Hamsa.The idol has four arms each holding a water pot- kamandal, a rosary - aksharamala, grass- kusha and a book-pustaka. The water pot resembles water out of which the entire universe emerged. The rosary denotes time and grass depicts the life cycle with various sacrifices by the life forms and the book represents knowledge. Beside the idol to the right is Goddess Saraswati ( goddess of knowledge) and to the left is Goddess Gayathri along with other deities. The temple walls are painted with embellishments of peacock, carrier of Goddess Saraswati and Lord Vishnu. There are life size statutes of gatekeepers and Garuda, carrier of Lord Vishnu.

Lord Bramha is one among the sacred Hindu triad. Being the creator he is born out of the supreme most power, the nurturer, Lord Vishnu. Lord Bramha is said to be red in colour when born and had five heads, one was burnt by Lord Shiva, the destroyer , another Hindu triad. Hindus worship all the three gods with equal fervour and faith. 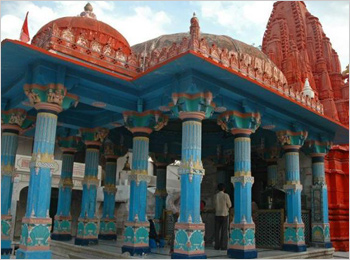 There goes an interesting story by the place name Pushkara. As mentioned in Padma Purana, an ancient Hindu scripture. Once a demon by name Vajranabha was on a mission to trouble and slew the people Lord Bramha created. Seeing this Lord Bramha killed him with a lotus flower that was in his hand. While doing so the petals of the lotus flower fell in three different places and created lakes. That's how Jyeshtha Pushkara or Pushkara lake, Madhya Pushkara and Kanishtha Pushkara came into being. When Bramha came down on earth he named the place as Pushkara( pushpa meaning flower and kara meaning hand). There are around 500 temples in and around Pushkara among them around 80 are bigger ones. The temples were destroyed during Moghul emperor Aurangzeb's rule but were restored at a later date. It is said that in ancient times Sage Vishwamitra built this temple of Lord Bramha after Bramha performed an Yagna and later renovated by Shri Adi Sankaracharya of 8th century. The present day structure of the temple is built by Raja Jawat Raj of Ratlam by retaining the original design of the temple.

There is another interesting story attached to the place as to when Lord Bramha thought of performing a Yajna in Pushkar, he created four hills surrounding the place to safeguard it from demons while he performed the Yajna. Thus,in the east there is a hill by name Suryagiri, Sanchoora hill at the west, Nilgiri hill to the north and Ratnagiri hill to the south. While giving aahuti( sacrificial offering) the last rite, his wife Saraswati also called as Savitri was absent. She was waiting for her friends Goddess Lakshmi, Goddess Parvati and Goddess Indrani. Since Yajna couldn't be finished without aahuti, Lord Bramha married Gayathri, a Gurjar girl from the region. She held amruta kalasha( pot of elixir) on her head and gave aahuti. Upon seeing Gayathri seated beside Lord Bramha in her rightful place, Goddess Saraswathi was furious and cursed Lord Bramha that he wouldn't be worshipped by anybody, anywhere except in Pushkar. She also cursed Lord Vishnu to be separated by his wife Goddess Lakshmi in a human form and Lord Agni to be hungry all the time. Lord Indra was cursed to be defeated easily and the priests who performed the Yajna to be poor always. Now with power of aahuti and performing Yajna, Gayathri eased the spell of the curse and blessed Indra to retain his heavenly throne always. Blessed Lord Vishnu to reunite with his wife by taking birth in human form as Rama. And finally blessed the priests to be looked up as scholars and Pushkar to be known as king of pilgrims. After this episode, goddess Saraswati ( Savitri) settled in Ratangiri hill to the south of Pushkar in the form of a stream. Till date the stream is known as Savitri Jharna and houses a temple of Goddess Saraswati beside the stream.

Although Pushkar is mentioned as the only place where Bramha temple is located in the world, there happen to be other temples dedicated to Bramha at later dates. However, this is the one in India and the Pushkar lake and the temple are listed as one of the ten most religious places in the world and one of the five pilgrimage places for Hindus in India by International Business Times.

The devotees - common men and saints alike visit the shrine after taking bath in the holy Pushkar Lake. After the worship they visit Goddess Gayathri and other deities as well near the place.

There are three aaratis performed in the temple. One 2hours earlier to sunrise called Managalaarti, second 40 minutes after sunset called Sandhyaarti and third at night 5 hours after sunset called Ratri Shayan aarti. The priests of the temple are descendents of Parashara gotra. Only ascetics or sanyasis can perform pujas in the inner sanctum. No common man is allowed inside the sanctum. Any offering has to be handed over to the priest from the mandap itself.

Annual festival of the reigning deity is held every year on Karthika Pournima ( full moon day falling in Karthika maasa). Many devotees visit the temple during this festival. A camel fair is conducted in a napearby place which is quite popular. Other than this day every pournimas and Amavasyas special poojas are performed.

Temples of Lord Bramha's two consorts Goddess Savitri and Goddess Gayathri are located at each side of the Pushkar lake. It is still believed that Goddess Savitri is angry so sits on the highest hill point ie of Ratnagiri hill. The other side of the Ratnagiri hill are sand dunes at the west. It's a place enjoyed by trekkers who climb the hill by steps over an hour. Visiting the marble temple in the morning is the best time to have a nice view of the lake and the scenic beauty. Goddess Gayatri also known as Paapmochini here is scared of Goddess Savitri and is seated in the lowest hill point at the east, on Suryagiri. Half an hour's trek from Marwar's bus stand will take you to the temple.

The Atpatshwar temple of Lord Shiva is situated next to Bramha temple in a cave. This temple is built by Lord Bramha himself in honour of Lord Shiva. It is said that Lord Shiva appeared in disguise of a tantric beggar with a skull in his hand during Lord Bramha's Yajna. When confronted Lord Shiva was upset and filled the place with skulls. The Lord Bramha medidated and came to be know that the tantric beggar is none other the Lord Shiva himself. Upon realizing Lord Bramha apologized to Lord Shiva and invited him to attend the Yajna. Lord Shiva attended the Yajna in the same form. Lord Bramha erected the temple and dedicated it to Lord Shiva calling him Atapateshwar. The Shivalingam in the temple is very large with a copper snake encircling the lingam. Special festivities are held here on Shivaratri day and visited by thousands of pilgrims.

The nearest airport is Jaipur -138km.

The Ajmer city is well connected to Delhi, Agra, Jaipur, Udaipur, Chennai and other important places.

Meaning -Lord Brahma, who created the universe with positive, negative and dormant qualities, who represents Om, the ultimate bliss. He is the supreme God, the one who created the form for everything. I bow to you Divine Lord Brahma.

Meaning -Om, let me meditate on the four-faced God, who travels on the swan. Give me greater intelligence and brighten my mind Lord Brahma.