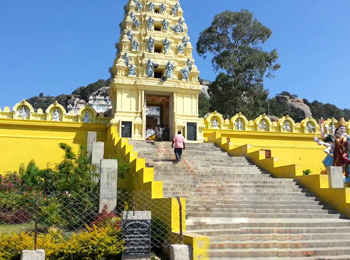 The Boyakonda Gangamma temple is situated in Chittoor in Andhra Pradesh. It is dedicated to Shakti. Gangamma is an incarnation of 'Shakti'.

This temple is a devi temple. The Purana says that Sri Boyakonda Gangamma Devi is the sister of Sri Venketeswara Swamy. This makes Sri Gangamma a significant Goddess who is connected with Tirupati, and she is perhaps second to Sri Padmavathi Ammavaru. Sri Gangamma Devi is known to care and protect her devotees. According to legend, she addresses her devotees’ problems and ensures that they are swiftly resolved. This temple was constructed to consecrate the memory of the goddess having defeated the Nawab's army when it invaded. The temple receives up to 20,000 visitors a day.

Legend has it that a few centuries ago, two tribes called as Boyas and Yelikas lived in the forest near the hill. Gangamma Devi was her chief deity. They prayed for good life and crops. But peace was broken by the Nawab’s invasion from the North. The two tribes united to repel the attackers. The Nawab feared a massive revolt and pulled out his main army to crush the Boyas and Yelikas. Tribal solidarity was not enough. Both tribes withdrew into the temple praying for the support and leadership of the Devi. Goddess Sakthi took a physical form, to crush the invading soldiers. According to legend, the anger of Devi was satiated only after separating the heads of the Navab soldiers who tried to harm her bhaktas.

How to reach the Boyakonda Gangamma temple

The nearest Bus stop is Pakala. The Nearest Railway station is Putalapattu station and nendragunta junction Railway Station. The Nearest Airport is Chennai and Tirupathi Airport.