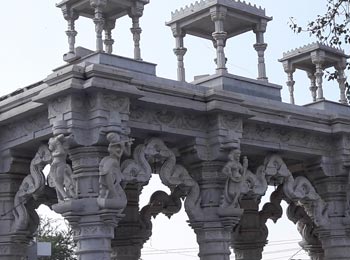 Bohra Ganesh Temple is a very old and famous temple of Lord Ganesh, situated near Mohanlal Sukhadia University in Udaipur. This temple is located on the Bohra Ganesh Road, around 2 km from city center, and 4 km from Udaipur City railway station. At the center of this temple, there is an east facing idol of the Lord in a dancing posture. Wednesday is considered as the special day to worship Lord Ganesha. Thousands of devotees visit Bohra Ganesh Ji temple to offer Prayer and Prasad (Sweets) to Shri Ganesh Ji.

Bohra Ganesh Temple is believed to be about 350 years old. Originally named as 'Borganesh', the temple was built outside the then city boundary of Udaipur. But since then, due to expansion of city boundaries, this area now falls within the city limits. Now the entire area is also known as Bohra Ganesh. This new name of this temple also has an interesting story behind. It is believed that 70–80 years ago people who needed money for purposes like marriage and business would write the requirement on a slip of paper and leave it before the idol. Soon he would get the amount needed, but in turn they had to return the amount with interest. In India, it is generally the Bohra cast which is involved in business of lending money. For this reason, Lord Ganesh here got named as Bohra Ganesh. However, it is also a common belief that devotees with real trust on Bohra Ganesh also get their wishes fulfilled.

Ganesh Chaturthi, the Hindu festival celebrated in honour of Lord Ganesha, is celebrated as an auspicious event at Bohra Ganesh Temple. On this auspicious day, temple is open from midnight till early morning, and witnesses around 2 - 2.5 lakh disciples visiting the temple.

Govardhan Puja or Annakoot, celebrated just after Diwali, is an auspicious event at Bohra Ganesh Temple. On this day, devotees offer 'Chappan Bhog' (meaning 56 dishes) to the deity at Bohra Ganesh Ji Temple. A ritual called 'Aangi' is performed at early dawn, followed by the Chappan Bhog feast offers to Lord Ganesha. In the evening, priests performs the 'Maha Aarti' (meaning great worship), and then offers 'Prasad' to the devotees.

How to Reach Udaipur

Dabok Airport, also known as Maharana Pratap Airport is the closest at about 25 km northeast of the city centre. There are daily flights from Delhi and Mumbai on Jet Airways, Air India and Spice Jet.