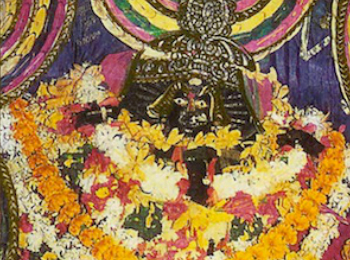 Jajpur is a historic place of pilgrimage is located at a distance of 92Kms from Cuttack. Once upon a time Jajpur was the capital of Kalinga kingdom and had achieved the pinnacle of glory in archaeological excellence. 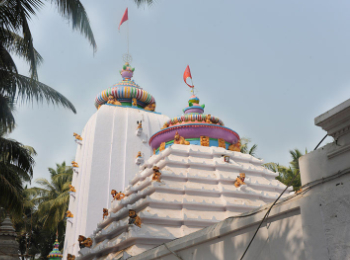 The goddess is having two hands (dwibhuja). Maa Durga is piercing the chest of Mahishasur (demon who could change between human and buffalo forms at will) with a trident (Trishul) in one hand and with the other hand she pulls the tail of Mahishasur. The idol is standing on the Lion with left foot and right foot is on Mahishasur's chest. Here Mahishasur is in the form of a Buffalo and is not a regular human demon. Maa Biraja image is unique i.e, the right hand of Maa Biraja that pierces with the trident is downwards unlike those images of Mother Durga where it points upwards. The crown of Devi has images of Ganesha, Naga or Serpent, Yoni, Shiva Ling and a Crescent Moon. All these images have the following implications. Ganapathi on the crown signifies that Maa Durga is the destroyer of impediments. Naga/ Serpent signifies Her omnipotence. Yoni and Shiva Ling signifies Her Creation and Destruction aspects. Crescent Moon signifies that Maa Biraja is the remover of all mental ailments. Maa Biraja is also worshipped as the “Adimata – The Ancient Mother” and was the most important deity of ancient Orissa. The temple is spread over a vast area and has several Shiva Lingas and other deities. Four Vairavas, Five Nrusinghas, Seven Matrukas, Twelve Madhavas and a Hundred and Eight Rudras surround Maa Biraja in the centre. The temple boundary is in triangular shape which extends in the west, south-east and north-east directions. Bilweswar, Varuneswar and Khilateswar Lingas located in the west, south and north-east direction guard the areas as guardian deities. 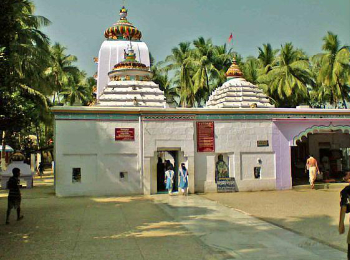 No historical record is available about the pristine glory of the great mother goddess Biraja before the great epic the Mahabharata was written. There is a reference to Virajah-Tirtha in the Vanaparva of the Mahabharata in chapter 85. Moreover the said epic reiterates that the Virajah-Tirtha was a sacred place for Vedic sacrifices where Dharma, the God of Righteousness had performed a great sacrifice. During the performance of sacrifice Rudra -Siva is said to have been accepted as an Aryan God by other Gods and the mother Earth had appeared in the form of altar. Therefore, it is but natural that the goddess Earth was worshipped as goddess Biraja of the Virajah-Tirtha, Later on. The Rgvedic earth goddess was a vaishnavite deity and so became goddess Biraja of the Virajah-Tirtha. The Mahabharata is as old as 7th-6th century B.C. as determined by the scholars. The historicity of goddess Biraja goes back to the days Mother Goddess worship of the Atharva Vedic period i.e. 13th century B.C.

She was originally worshipped in the form of an altar and later on in the form of Stambhesvari (pillar Goddess) as was the primitive practice when carving of stone; metal or wooden images were yet to come about. Most probably she was vindhyavasini and Biraja as they named her. During the Gupta rule in India in the 4th century AD, Goddess Biraja was metamorphosed in the theriomorphic form and a stone image of two-armed Mahisamardini was installed in a temple after a great Vedic sacrifice beside the river Vaitarani. Since then she is being worshipped on the pedestal as the symbol of paramavaisnavi Sakti icon. Simultaneously Nabhigaya, a great Pitr Tirtha, Isanesvara, lord Varaha and many ancillary deities were added to the Biraja tradition. We are apprised of her greatness from several copper plate grants of Durjaya, Vigraha, Dutta and Mana royal dynasties who patronised and revered the deity. During Bhaumakara rule in Odisha she was worshipped as the royal Goddess of the Bhaumakaras. During the Somavansi rule in the 10th -11th century AD, a beautiful temple for Goddess Biraja had been built by Candihar Yayati II. Biraja Ksetra was made a full-fledged Sakti pitha with the association of Asta Candi, Asta-Bhairava, Navadurga, Sapta Matrka, Trayodasa Rudra, Dvadasa Ganesa, Sixty eight Tirthas and Causathi Yogini during Bhaumakara and Somavamsi period. The Somavamsis added a car festival or Rathayatra with the Biraja tradition like that of the Goddess Vindhyavasini and Sthambhesvari of mid-India. Though during the Mughal Afghan rule the Sakti worship relating to Goddess Biraja faced the ups and downs, the tradition continues undeterred till today.

Biraja Kshetra or modern is regarded as the synthesized cultural centre of Odisha. Apart from general festivals connected with other religious faiths observed throughout Odisha.

Local government has arranged guest house named “panthashala” for the purpose to avoid the staying problem of the pilgrims coming from far distant. It is situated some steps away from the temple in the north side which provides all the mandates.

The Nearest Airport is at Bhubaneswar.

The Nearest Bus Stand is Jajpur Bus stand which is 2 km distance from temple. Tourist can reach to the spot by availing bus from Cuttack, Bhubaneswar, Kolkota and other small cities of Odisha. Journey can be more comfortable if tourists hire a four wheeler to visit the spot.