Bhubaneswar was the ancient capital of the Kalinga empire. The Bhrukutesvar Siva Temple is situated in Yamesvara Patna, Old Town. It is a single structure pidha deul without any frontal porch. According to the local people this temple was built by the Kesaris (Somavamsis). The temple is at a distance of 40 mtrs west of Talesvara temple across the compound wall, 30 mtrs north-west of Yamesvara temple and 20 mtrs east of Bakresvara temple. 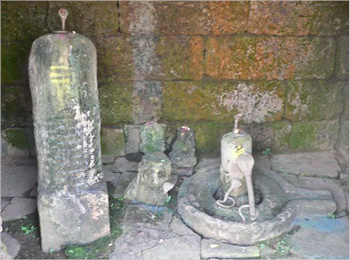 The late 13th Century stood as a witness to the construction of the Bhrukutesvar Shiva Temple initiated by the rulers of the Ganga Dynasty. This religious monument, facing the northern side, is a single structure confirming itself to the pidha deul order devoid of any frontal porch. Bhrukutesvar Shiva Temple is an exclusive illustration of the construction technique of the ancient period and exhibits the Kalingan style of architecture. The temple has been built using laterite adopting the dry masonry style of construction technique. On plan, the temple consists of a square vimana and on elevation the vimana is a pidha deul that measures 5.03 metres in height. The bada, gandi and mastaka further define the architectural elements of the shrine. Within the compound wall on the eastern side of the temple there are four niches of latter construction. Though the first niche is empty, the second niche houses an image of Lakulisa (the most prominent guru (ca 200) of the ancient Pasupata school of Shaivism) and the other two niches house two images of Uma-Mahesvara(Shiva and Parvathi) carved in sand stone, the image of Lakulisa is seated in “Padmasana” on a lotus pedestal. While his hands are in Dharmachakrapravartana mudra staffs rests on his left shoulder.

Bhubaneshwar is well linked by air to Delhi, Chennai, Varanasi, Nagpur, Calcutta, and Vishakhapatnam on daily basis flights by Indian Airlines. The Biju Patnaik Airport at Bhubaneswar provides daily connections to many cities. Superfast trains connect Bhubaneswar to major cities of India. Bhubaneswar is well linked to the rest of India by the national highways. The New Bus Stand in Bhubaneswar is on NH5, at Baramunda, about 6 km from town centre.