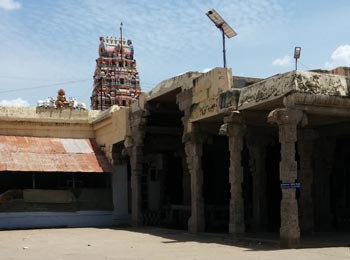 Thiruchuli Bhoominathar Temple is a prominent Shiva shrine located near the town Manamadurai in the Virudhunagar District of Tamil Nadu, India. The temple is considered one among the twelve Tevara Stalams in the Pandya region of Tamil Nadu. Tiruchuzhi is situated around 55 km south of Madurai and is known for being the birthplace of Sri Ramana Maharishi. The presiding deity of this temple is Lord Bhoominathar and Tunaimaalai nayaki Ambal. Lord Surya is believed to have worshipped the Dinakareswara Lingam at Thiruchuzhial. Thirumeninathar is the festival deity.

It is believed that Lord Shiva came to Thiruchuzhial since he considered this place more glorious than the divine Mount Kailas. The much revered Nayanmars (Saivite Saints) Sundarar and Thirunavukkarasar is said to have visited this place to worship this deity and had stayed in the mutt here. According to myths, Lord Shiva is said to have appeared in the dream of Saint Sundarar with a gold bouquet and tuft in the head, gracing as a young lad. Lord Shiva showed his divya darshan along with his consort, in his wedding attire. Some devotees also undertake to perform the marriages of their family members in this temple.

The speciality of the Thiruchuzhi Bhoominathar temple is that, worshipping Lord Shiva in this place with a Vilwa leaf is considered equivalent to worshipping him with 1000 vilwa leaves in all sacred Shiva temples of the country. Devotion towards this deity is sure to provide salvation. All the sins committed by a person is said to have been forgiven by the blessings of this Lord. Charities offered here bring manifold benefits to the devotees than done at other places.

This place is also praised as Vayalur, Mukthipuram, Avarthapuram, Shulapuram, Arasavanam, Chuzhigai and Chuzhikapuri. Aambal Thunaimalai Nayaki appears as Ma Meenakshi in Madurai. People come here to wash away their sins committed else where in the world. There is no other place in this world where people can wash away the sins committed here. Offering prayers to this deity is the only way to resolve this.

Thiruchuzhial is relatively a big town. The temple is surrounded by the mada veethis (car streets) and stands facing the direction east. On worshipping Lord Vinayaka at the entrance, we come across the Devi shrine opposite the entrance. On the right is the shrine of the Lord. There is an Asthana Mandapa located nearby. The Kodimaram (Flag post), Nandhi and the Bali peeta are at the Kambathadi mandap. The idols of Lord Vinayaka and Muruga are found at either sides of the entrance.

The Rajagopuram (main tower) of this shrine is seven tiered. On worshipping Lord Adhikara Nandhi Deva, devotees reach the peeta with just six foot steps. Hence it is called the Aarukaal Peeta (Six Steps peeta). The epigraphic details of the temple are found in this place. Sabha Mandap, Artha mandap and Andharala Madap are situated next to the Peeta. The presiding deity is Lord Thirumeni Nathar who is present within the main Sanctum sanctorum. There is also an idol of Lord Nataraja next to it. On the first prakara is the Surya Bhagvan(Sun god) who graces on the east. The Saptha Madhas and 63 Nayanmars are seen in the direction south.

The Vinayakar Sannidhi is in the southwest side of the prakara. The sannidhi of Lord Somaskanda, Lord Viswanatha with Mother Visalakshi, Chuzhigai Govindar and Lord Muruga are found on the northwest. The shrine of Lord Chandikeswara shrine lies to the direction north and Lord Nataraja is found on the northeast. The sannidhis of Lord Kalabhairava and Surya bhagavan are found on the east. On the precinct of Lord Bhoominathar’s sanctum, are the idols of Lord Dakshinamurthi which found on the south. Lingodhbava is in the west and Mother Durga in the north. The Artha Mandap and the Palli Arai-privacy room are near the Ambal’s sannidhi. This is one among the temples that comes under the Sethu Samasthanam.

The following are the festivals that are mainly celebrated in this temple.

How To Reach Bhoominathar Temple

Bus facilities are also available from cities and towns like Madurai, Virudhunagar and Aruppukottai. The temple is near the thiruchuzhi bus stand.

The closest airport is the Madurai Airport.