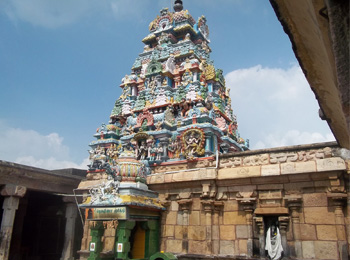 Mannachanallur is a town located about 10 kms away from Trichy. The temple of Lord Bhoominathar is located in the middle of this town. The Bhoominathar temple is well known for resolving problems related to Vaastu. The temple is said to have been built by a king having vaastu related problems, prayed Lord Shiva and built this temple for him.

The temple consists of a main sanctum dedicated to Lord Bhoominathar and Jagadambal Ambal. Sri Nandi Deva is seen playing the Maddhala, sitting at the feet of Lord Nataraja. Karaikal Ammayar who is one of the greatest Shaivite saints is seen sitting next to the Lord, in her Ghost form. The sanctum of Lord Dakshinamurthi has a Vimana (tower) over it. The temple complex consists of five holy trees known as the pancha Vrukshas. They are Magizham, Vanni, Athi, Vilwam and Kurndhai. There are shrines for the four important Nayanmars, popularly known as the Nalvar namely Gnanasambandar, Tirunavukkarasar, Sundarar and Manickavasagar. The idol of Lord Vinayaka is placed under the Vanni tree. There are also idols of Lord Nagabarana Vinayaka, Saptha Kannikas (seven virgins), Lord Kasi Viswanathar with Visalakshhi Ammal, Sri Anjaneya Swamy, Lord Muruga with his consorts Valli and Deivanai, Chandikeswara, Chandikeswari and Kalabhairava. Karuppannar who is considered as the local guardian deity has his shrine is at the entrance of the temple. The Surya Bhagvan (Sun God) graces with his consorts Usha and Pradyusha.

Past history tells us that the region was ruled by a king who faced few administrative problems which could not be solved despite all his efforts. A great yogi came to this place to who The King is said to have explained his problem. The yogi had advised the King to worship Lord Shiva since the place has some Vastu related problems in the construction of his palace. The dutiful King then installed a Linga and worshipped Lord Shiva, naming him Bhoominathar. Later, the king is believed to have found solutions to his problems. A shrine was later built here for Devi Parvati too, who came to be called as Jegadambikai Ambal.

Vaikasi Visakam in May-June, Aadi Pooram in July-August, Navarathri in September-October, Aipasi Annabishek and Skanda Sashti in October-November, and Tirukarthikai in November-December and Guru Pujas for Nalvar the authors of Thevaram and Tiruvasagam hymns and Sekkizhar, author of Peria Puranam covering the life stories of celebrated Saivite saints. Special festivals – theertha Utsav is celebrated for Panchamurthis on Masi Magam (February-March) and Thai Poosam in January-February.

People facing problems regarding land, house and other constructions are advised to take part in the Yagna performed on Vasthu days. Special Abishekas are performed to Lord Bhoolokanathar with the sacred water in five pots (kalasas). Devotees have the practice of offering rice mixed with stems grown under the soil such as carrot, beetroot, groundnut etc.

Worshipping Lord Bhoominathar is said to solve disputes relating to Land and property.

The nearest airport is the Trichurappalli Airport. Buses and Taxis can be taken to reach the temple at Mannachanallur from the airport.

The nearest railway station is at Trichy.

The temple is located near the market bus stop in Trichy. Town buses are also available from the central bus stand, Trichy.