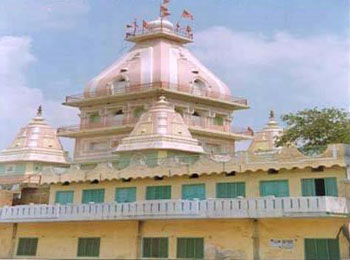 Maisar Khanna is a village located in the Bathinda District of Punjab. The village is known for a sacred Bagavathi temple that is devoted to Goddess Shakthi Devi. A huge temple fair is held twice a year in the village. The deity of this temple, Devi Bhagvathi is in the form of a little girl and is believed to fulfill her devotee’s wishes.

There is a fascinating story behind the worship of Bhagvathi Matha in Khanna. During the17th century AD, people from this village had a practice of worshipping the goddess from Jawala Mukhi temple in Kangra. One day, two villagers named Kamala Bhagt and Kali Nath were proceeding towards the Jawala Mukhi temple for offering their prayers to the Devi there, when Bhagwati Mata, the deity of Jawala Mukhi temple appeared before them. She is said to have blessed the devotees and had told Kamala Bhagat that he needn’t undertake the pilgrimage to Jawala Mukhi anymore and that his worship at his village will be considered as his worship at her abode. This is how the Bhagvathi Maths temple is said to have come to existence in Maisar Khanna. Since then a religious fair is held at this place twice in a year commemorating this event.

Punjab has a well developed railway network that connects it with major towns and cities of the country. The Batinda Railway station is the closest to this temple. Regular trains connect the place with other cities like Chandigarh, Ludhiana, Jalandhar, etc.

Few state and national highways run through Bathinda and is well connected to other towns and cities in Punjab and its neighboring states.