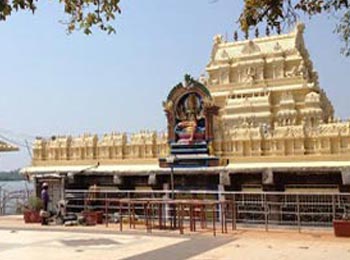 The Bhadrakali Temple located at Warangal, Andhra Pradesh, is one of the most renowned and oldest temples dedicated to Goddess Bhadrakali in India. This ancient temple is located on the banks of the Bhadrakali lake, somewhere between the places Hanamkonda and Warangal.

This famous Bhadrakali temple is believed to be constructed around the year 625 AD, by King Pulakesi II of the Chalakya dynasty. The temple stood abandoned, surrounded by forest until 1950s. Sri Ganapathi Saatchi, a brahmin from Karnataka had migrated to Warangal. He showed specific interest in renovating the temple and thus started living in a small house next to the temple. He sought the help of few local merchants, including Sri Maganlal Sameja to renovate the old temple. Since then, regular poojas are being conducted in this temple. Sri Gapanathy Sasthri is now around 105 years old and is still actively participating in the temple affairs, despite it his old age.

This temple complex at Warangal enshrines the several avatars of Goddess Bhadrakali matha at one place. The unique feature of the temple is the square shaped stone image of the Goddess seen in a sitting posture with a pleasing face and eyes. The mighty goddess adorns a crown and is seen having eight hands (Ashtabhuja), holding various weapons. A statue of Lion which acts as Devi Bhadrakali's vahana is found opposite the main sanctum sanctorum. The temple also houses other deities like Lord Shiva, Subramanya Swamy and Hanuman, in addition to the Navagrahas within the main temple. A separate shrine for Lord Vigneshwara was built outside the main temple a decade ago. This Bhadrakali Temple has become a major tourist place of the city Warangal. Large numbers of devotees from many parts of India, visit this temple to worship and seek this Goddess’s blessings.

The popular Warangal Fort which was built by Kakatiyas, is located about 10km from this temple. A Swayambhu Linga of Lord Shiva is found within the fort. An Inscription dating back to 1163 AD is found here.

This Bhadrakali temple is surrounded by mountains having 8 major and 12 minor temples.

The Bhadhrakali temple is vibrantly decorated during festival times. Devotees throng this temple in large numbers, especially during the Brahmotsavams, which are organized every year during the month of April or May.

During Shravana Masa, which is the month of August- September, temple celebrates many prominent festivals such as Vasanta Navaratri, Shakambari Utsavam and Sharan Navaratri. Bathukamma Festival is also celebrated with great fervor here when women and girls with beautifully arranged flowers flower patterns, visit the Bhadrakali Lake to offer prayers.

How To Reach Bhadrakali Temple

The closest bus stop is the Warangal.

The Warangal Airport is the closest located airport to this temple.