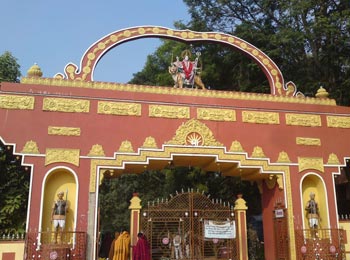 The famous Bhadrakali Temple of Itkori is situated in the Indian state of Jharkhand. The temple is primarily dedicated to Goddess Kali and is located on the banks of the river Mahanadi. Surrounded by thick forests and hills, this shrine lies at a distance of about 16 kms to the west of Chauparan and is well connected by the G.T. Road.

The temple is historically significant, especially because of the black coloured statues that were constructed here during the reigns of Shak, Gupta and Vardha about 1500 to 1800 years ago. These statues were found from this temple site during excavations. Currently the temple stands as a major pilgrimage centre as well as a renowned tourist destination. Gauthama Budhdha is believed to have visited this place and had stayed here for some time. Later, his relatives came here in search of him but Buddha ignored to recognise them. His relatives are believed to have said “Itkhoi – Yahi kho diya”. Since then the place got its name as ITKHORI.

The Archaeological Survey of India has cleared only the wild under growths close to Ma Bhadrakali Temple until recently. Actual excavation works are yet to start. In January 2012, a black stoned plate of a Jain Tirthankar was found. A 20cmx10cm measuring disc pertaining to Jainism was also excavated from a Buddhist stupa on temple this premises. Further excavations are believed to reveal Itkhori as the birthplace of Jain Tirthankar Sheetalnath and also one of the holy places visited by the great Buddha himself. In the year 1983, villagers had discovered the charan paduka of Jain Tirthankar Sheetalnath.

How To Reach Bhadrakali Temple

The nearest bus stop is located at Chatra.

The closest railhead is situated at Koderma railway station.

The nearest Airport is the Gaya Airport.