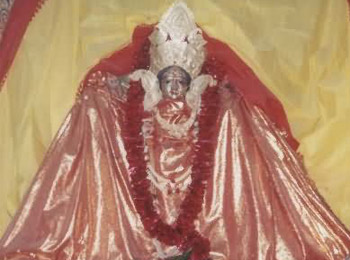 Bhabanipur is a sacred place near Karatoyatat, located around 28 kms or 17 miles from Sherpur Upazila of Bogra District, Rajshahi Division, Bangladesh. It is one of the 51 Shakti Peethas situated in India. Being a Shakti Peeth, Bhabanipur is a historic and holy place for Hindu pilgrims.. There are number of temples in the premises of this Shakti-peeth, that are visited by pilgrims from all over the country and abroad, irrespective of sectarian differences. 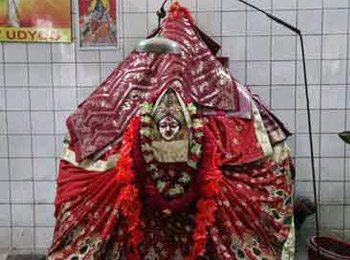 The Shakti Devi here is called Aparna and the Bhairava is Vaman. As per various sources, the body parts of Devi Sati Maa Tara's that fell at Bhabanipur are right eye, bedding, left anklet (ornament), ribs of left chest. 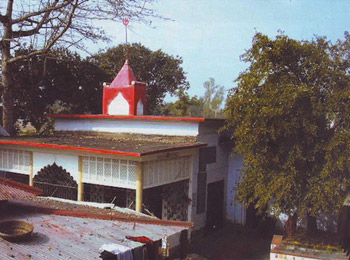 According to Hindu epic, Mahabharata, in the Satya Yuga, King Daksha arranged a ritual called Daksha Yagna in which his daughter Goddess Sati and Her husband Shiva were not invited. Despite uninvited Goddess Sati attended the function. Unable to bear the insult of her beloved husband Lord Shiva, Goddess Sati protested by sacrificing Herself into the sacred fire of the Yagna. Enraged with grief, Lord Shiva started dancing furiously as though he will destroy the universe carrying the body of Devi Sati on his shoulder. To put an end to this and calm Lord Shiva, Lord Vishnu cut the corpse of Goddess Sati with the Sudharshan Chakra and as a result the various pieces of Goddess Sati's body and Her ornaments fell at various places in the Indian subcontinent. These places are now known as Shakti Peethas. Shakti Peethas are holy abode of the Mother Goddess. Each temple have shrines for Shakti and Kalabhairava. The Shakti of Bhabanipur shrine is addressed as "Aparna"and the "Bhairava" as "Vaman". It is believed that Sati Devi's Left anklet fell here.

There is a legend that states, that once a conch-bangles dealer was passing by the side of a lonely pond in a dense jungle near the then Bhabanipur temple, a little girl with vermilion on her forehead approached him and told him that she was the daughter of the Natore Rajbari (Palace). She bought a pair of conch-bangles from him and requested him to collect the price of that bangles from the then Maharani Bhabani; from a basket that was kept in the Rajbari palace at a certain place. Her appearance and polite words overwhelmed the conch-dealer. Maharani Bhabhani rushed to the place with her courtmen and the conch-dealer as soon as she heard the entire narrative from him. On the earnest prayer by the conch-dealer, Ma Bhabani raised from that pond showing her two wrists with the conch-bangles worn. The queeni and her men were surprised, and the divinity of Mother Bhabani spread throughout the subcontinent. This is that holy "Shakha-Pukur" (conch-bangles pond) where the devotees take holy dip when they visit the place.

1. Maghi Purnima in the Bengali month of Magh/Falgun
2. Ram Nabomi in the month of Chaitra/Baishakh
3. Durgotshov in autumn
4. Dipannita Shyama Puja
5. Nabanna in the month of Aghrahoyon

International Airport of Dhaka (Capital of Bangladesh) is the viable option if one is travelling by air.

Railway is not available between two countries.

The devotees can reach Bhabanipur through Mirzapur or Ghoga Bot-tola bus-stop (on Bogra-Dhaka highways) of Sherpur Upazilla of Bogra District.