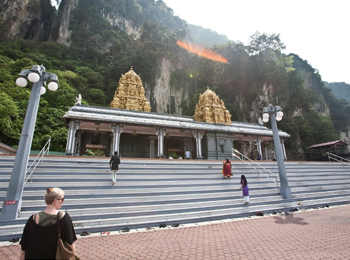 The deity of God Murugan is worshipped at the holy Batumalai Sri Muruga Perumal Kovil / Batu Caves which is located at Selangor in Malaysia. These caves are constructed within a limestone hill and are named after a river called Sungai Batu. This limestone hill is known to be the tenth limestone hill from Ampang hill. These caves are among the most famous Hindu worshipping centers built outside India. The festival of Thaipusam is celebrated with great joy at this temple.

The structure of the caves comprises of a few small caves and three large caves that are 100m above the ground. The central cave called the Temple Cave or Cathedral Cave is the biggest in the temple. The cave consists of high ceiling and the devotees have to climb 272 steps to reach this beautiful cave. The two other caves that are constructed at the base of the temple comprises of paintings as well as idols depicting Hindu Mythology. These caves are called Museum Cave and Art Gallery Cave. In 2008, these caves were reopened after renovation as the Cave Villa. An audio tour was introduced during the reopening which explained the various stories of God Muruga’s victory over the demon named Soorapadman. Another cave exists in the extreme left of the structure towards the sheer wall of the hill, known as Ramayana Cave. This cave comprises of a 50 feet tall deity of God Hanuman who was a devotee and protector of God Rama. On November 2001, a consecration ceremony was held in the temple. The carvings on the walls of this Ramayana Cave depict the life of God Rama. The deity of God Muruga was enshrined in this temple in the year 2006. This deity is 140 feet tall and is the tallest deity of God Muruga in the world.

These Batu Caves have been present for almost 400 million years. The entrances of these caves are used by the Temuan people of Orang Asli tribe as shelters. These caves became popular in 1878 after the colonial authorities namely Daly, Syers and American Naturalist William Hornaday recorded these limestone hills as ones with archaeological importance.
K. Thamboosamy Pillai, an Indian trader promoted these caves as a sacred region of worshipping due to his dedication to God Muruga. The trader was inspired by the entrance of this magnificent cave which were ‘vel’ shaped. He then found the Sri Mahamariammam Temple in Kuala Lumpur in 1890 and enshrined the deity of God Muruga in it. This temple is now called the Temple Cave.

The Thaipusam festival is the main festival which is celebrated on a grand scale every year. Thousands of pilgrims and devotees from Malaysia and other countries visit during this festival. The celebration begins in the Sri Mahamariamman Temple with a procession conducted early in the morning and it is then led to Batu Caves. This ritual goes on for 8 hours and is considered a religious undertaking dedicated to God Muruga. The devotees offer milk to God Muruga either by a decorated carrier called Kavadi or by hands. The devotees decorate this Kavadi of almost 100kgs with peacock feathers and flowers.
The devotees also take a bath in the nearby river of Sungai Batu before climbing the stairs to reach the temple. The priests help the Kavadi Bearers and attend to the offerings during the ritual. The hooks are consecrated with sacred ash to protect them.

How to Reach Selangor

The Kuala Lumpur International Airport is nearest to the temple. The Subang Domestic Airportlocated at Selangor is also near the temple.

The nearest Railway Station is KTM Komuter which is linked to all the major cities of Malaysia. The devotees can access the Rapid KL Light rail Transit Network to reach Selangor.

Frequent bus and taxi services are available to reach the temple. The devotees can use cash or touch and go cards while travelling.