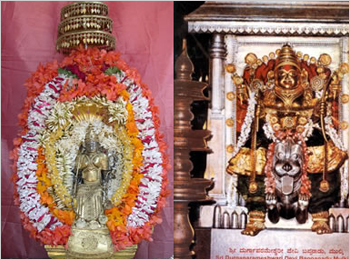 The Sri Durga Parameshwari temple is situated in the Bappanadu village of the Dakshin Kannada district. The temple is located on the banks of River Sambhavi. 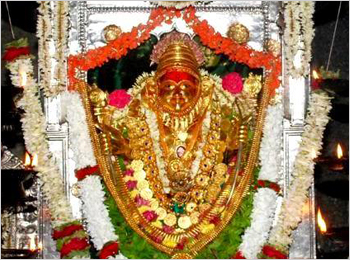 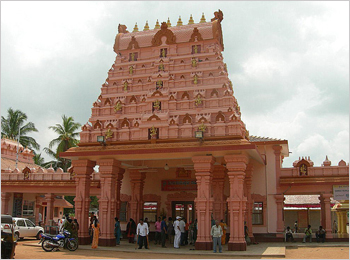 The main deity is Goddess Shree Durga Parameshwari. In this temple, Lord Shiva is in form of a linga or a symbolic statue. 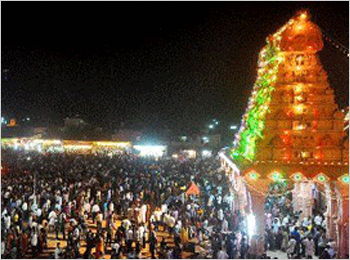 Shonitapura was ruled by a demon named Darigasura. He was an enemy of Lord Vishnu and other Devatas. The demon Darigasura worshipped Lord Brahma and procured a boon to defeat Lord Vishnu and the Devatas. He ultimately defeated the Devatas and Lord Vishnu and snatched Lord Vishnu’s ammunitions. Darigasura asked his wife to keep the ammunitions in the temple for safe keeping. Meanwhile, Goddess Durga Parameshwari appeared in the form of seven women (Sapta Durgas) in front of Lord Vishnu and promised to kill the demon. The Sapta Durgas then went to Shonitpura. They were accompanied by a deity named Guliga. One of the Sapta Durgas, Bhagawati, disguised herself as an old woman and appeared before the demon requesting him to provide her a meal. The demon asked the old lady to go to his wife. He also informed her to let him know if she didn’t get a meal. Bhagawati went to Darigasura’s wife and asked for the ammunitions instead. When his wife did not comply with Bhagawati’s requests, she went to Darigasura and wrongly informed him that his wife had denied her a meal. Hearing this, Darigasura ordered his wife to give Bhagawati what she had asked for. His wife gave away the ammunitions.

When the demon realised that he had been deceived by the Sapta Durgas he waged war against them. The deity Guliga was defeated. But after seven days, the seven goddesses defeated the demon and he ran away and took shelter in the underworld. Goddess Bhagawati took the form of Bhadra Kali and began searching for Darigasura. When the demon came to worship Lord Shiva, Goddess Bhadra Kali killed him. The Sapta Durgas accompanied by Deity Guliga, then visited Lord Vishnu and asked him to create a sandalwood boat to carry them from Vaikuntha (heaven) to Bhoolaka (earth). The boat came to Bhoolaka and crossed Kasaragod, Kumble, Uppala, Pattattur, Manjeshwara, Udyavara, Ullala and Kudroli along the southern coast of India. From these places, it came to Sasihithlu, located near Mulki. The seven goddesses decided to settle there after taking tender coconut from a low caste devotee. At the intersection of Rivers Nandini and Sambhavi at Mulki border, a symbolic form of the Devi known as Goddess DurgaParameshwari emerged.

This festival comes in the day of Meena Masa Shuddha Chathurdhashi and celebrated for 8 days with unique feature in each day.

Mulki is a town on National Highway. Plenty of Buses ply to Mulki from Mangalore and Udupi. The closest railway station is in Mangalore, as also the airport.