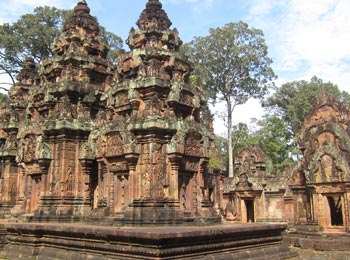 Banteay Srei or Banteay Srey is a 10th-century Cambodian temple dedicated to the Hindu god Shiva. Located in the area of Angkor in Cambodia. It lies near the hill of Phnom Dei, 25 km (16 mi) north-east of the main group of temples that once belonged to the medieval capitals of Yasodharapura and Angkor Thom. Banteay Srei is built largely of red sandstone, a medium that lends itself to the elaborate decorative wall carvings which are still observable today. The buildings themselves are miniature in scale, unusually so when measured by the standards of Angkorian construction. These factors have made the temple extremely popular with tourists, and have led to its being widely praised as a "precious gem", or the "jewel of Khmer art."

Sanctified on 22 April 967 A.D. Bantay Srei was the main real temple at Angkor not worked by a ruler; its development is credited to the squires named Vishnukumara and Yajnavaraha who filled in as a guide to lord Rajendravarman II. The foundational stela says that Yajnavaraha, grandson of lord Harsavarman I was a researcher and altruist who helped the individuals who experienced sickness, unfairness, or destitution. His understudy was the future lord Jayavarman V (r. 968-ca. 1001). Initially, the temple was encompassed by a town called Isvarapura.

Banteay Srei is known for the complexity of its carvings. This cutting is of a kala, a legendary animal illustrative of time and of the god Siva. Yajnavaraha's temple was essentially committed to the Hindu god siva. Initially, it was conveyed the name Tribhuvanamahesvara—extraordinary master of the triple world—in reference to the Shaivite linga that filled in as its focal religious picture. Be that as it may, the temple structures have all the earmarks of being partitioned along the focal east–west pivot between those structures found south of the hub, which are given to siva, and those north of the hub, which are dedicated to Viṣṇu.

It has been guessed that the temple's advanced name, Bantay Srei, is expected to the numerous devatas cut into the red sandstone dividers. The temple's current name, Bantay Srei-bastion of the ladies, or fortress of magnificence is presumably identified with the multifaceted nature of the bas help carvings found on the dividers and the minor measurements of the structures themselves. Some have conjectured that it identifies with the numerous devatas cut into the dividers of the structures.

How To Reach Banteay Srei Temple

Regular buses ply to and forth from important cities around the region. Therefore, you could board a bus to reach Angkor. The Nearest railhead is Siem Reap railway station. The Nearest Airport is Siem Reap International Airport.