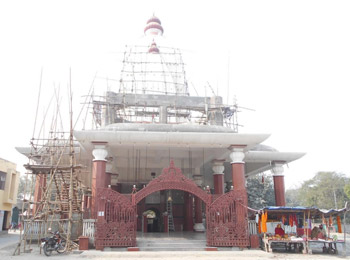 The temple is in the midpoint between Kasi Vishwanath Temple in Varanasi and Baba Vaidyanath Dham in Deoghar. The temple lost prominence during the 5th century as a result of the attack of foreign invaders. The Shiva ling was rediscovered around 150 years ago while digging a well in the region. The people have now built a temple around the Shiva ling. During the excavation in 1945, a gold coin was obtained which belonged to the Chandragupta-II "Vikramadithya" period.

Located on the north-eastern side of Vaishali City, the temple consists of a "Chaturmuki Shiva ling" which is made of large black stone. The mouth of the Shiva ling comprises of four gods namely - Brahma, Vishnu, Mahesh and Surya. The Shiva ling faces south. The third eye of one of the faces is open and it faces south. Beneath the Shiva ling, there are three large circular "Argha".

According to legend, the temple existed during the Ramayana period. Lord Rama, Lakshmana and Sage Vishwamithra visited the temple while on their way to kingdom of Janaka. It is believed that Buddha and Mahavir stayed in the shrine.

The most important festival in the temple is Shivrathri, Shravan month and Shravan Poornima.


Patna is the nearest airport from Vaishali.


Hajipur is the nearest railhead.


Vaishali is well connected by road to other important cities.