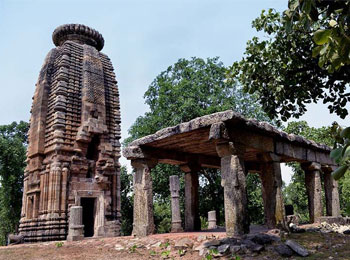 The village Banda (aka Deulghera) is located in Raghunathpur II P.S. (1km from Cheliama). The Solitary temple present at the site is said to be built in the 11th century AD. The abandoned temple suffered damage under the Muslim invasion but contains a large amount of information pertaining to the History of West Bengal. The site holds no inscriptions or evidence thus making it unclear as to who built the temple.

The temple was constructed in the Rekha style and is considered to be 75 feet long. The plan consists of tri-ratha. In each wall is a 13’ square with very simple base mouldings and plain squared pilasters on either side of a niche. The central projection is adorned by interconnected chaityas and foliated scrolls. The tower also has Bhumi-amalakas which head up the corners. Between the corners and the scrolls are two separate vertical rows of projecting chaityas.

The southern side of the central projection symbolizes the Middle Eastern Islamic influence having a large interwoven leaf structure below which is a lattice like design. The door is a carved structure depicting boys on a wave blowing horns bordered by foliated scrolls which is double bordered by floral lozenges. A single square cell (6.6') has a projecting shelf of 31/3ft. None of the Idols in the temple faces north. The temple has a largely damaged mandapa with eight pillars that still support the croosbeam. The mandapa is followed by a water outlet on the east which is also known as Makara head.

The nearest airport to Purulia is the Netaji Subhash Chandra Bose airport (Kolkata) which is a national and international Airport.

Purilia district has its own Railway station which is a renowned railway station in West Bengal. Direct trains connect the district to all parts of India including Delhi, Orissa, and KolkataAsansol, Chakradharpur, Burdwan and Kharagpur. The Puraliya express runs on all days from howrah except on Saturday.

Puralia is a popular tourist spot and has an excellent road transport system including private and government buses along with taxi services.