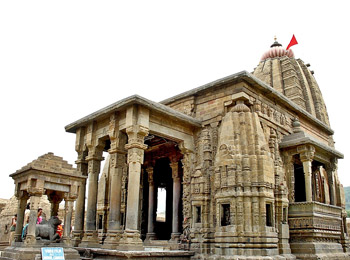 The temple of Baijnath, is devoted to Lord Shiva and is located in the valley of Beas, in Himachal Pradesh, India. The inscriptions on the walls of Baijnath Mandir says that the temple was built by the two native merchants, Ahuka and Manyuka in 1204 A.D.

Baijnath or Vaidyanath is a famous temple dedicated to Lord Shiva built in the 13th-. Lord Vaidyanath is worshipped as ‘the Lord of physicians’. Initially known as Kiragrama, the village is located on the Pathankot-Mandi highway almost midway between Kangra and Mandi. The temple is popularly known by the current name Baijnath. The village is situated on the left bank of the river Binwa, a corrupt form of ancient Binduka, a tributary of river Beas.

The Baijnath temple has been incessantly under worship ever since it was constructed in the year 1204 A.D. The two long writings in the entrance of the temple show that a temple of Shiva happened to be their on the spot even before the current one was built. The present temple is a beautiful one, built in the Nagara style of architecture dated early medieval period. The Svayambhu form of Sivalinga is enshrined in the sanctum sanctorum of the temple that has five projections on each side and is surmounted with a tall curvilinear Shikhara. The entry to sanctum is through a passage that has a large square "Mandapa" in front with two enormous balconies one each in north and south. There is a small porch in front of the mandapa hall that rests on four pillars. In the front there is an idol of "Nandi", the bull, in a small pillared shrine. The entire temple is surrounded by a tall wall with entrances in the south and north. The outside walls of the temple have numerous niches with statues of gods and goddesses. Many images are also fixed or engraved in the walls. The outside entrance in the porch as also the inner entrance leading to the shrine of the temple are also studded with a large number of imageries of boundless beauty and iconographic importance. Some of them are very rare to be found elsewhere.

The temple interests large number of tourists and pilgrims from all over India and abroad all over the year. Special prayers are offered in the morning and evening every day in addition to during special occasions and during festive times. Makara Sankranti, Maha Shivaratri, Vaisakha Sankranti, Shravana Mondays, etc. are celebrated with boundless enthusiasm and splendour. A five-day state level function is held here on Maha Shivratri every year.

As the legend goes, it is believed that during the Treta Yuga, Ravana in order to obtain invincible powers, venerated Lord Shiva in the Kailash for a long period. During his tapas, in order to please the almighty, he offered his ten heads in the havan kund. Pleased with this extra ordinary deed of the Ravana, the Lord Shiva not only reinstated his heads but also conferred him with powers of invincibility and near immortality.

On obtaining this unparalleled boon, Ravana also wished Lord Shiva to accompany him to Lanka. Shiva agreed to the request of Ravana and transformed himself into Shivling. Then Lord Shiva ordered him to carry the Shivling and cautioned him against placing the Shivling on the ground on his way to Lanka. Ravana started moving south towards Lanka and arrived at Baijnath where he felt the need to answer the nature’s call. On seeing a shepherd, Ravana passed over the Shivling to him and went away to relieve himself. The shepard boy couldn’t hold on to the Shivling as it was very heavy. He put the linga on the ground and thus the Shivling got established there in the form of Ardhnarishwar.

One more account suggests that while Ravana was coming down the Himalayas with the Shivling which Lord Shiva had awarded him after years of worship. This Linga was supposed to be established at Lanka, by doing which would have blessed him (Ravana) with insuperable powers, but on one condition. The Linga was not to be placed on the ground anywhere in the course of travel, even while resting, Ravana was deceived by one of the Devas (Gods), who pretended to be a beggar and wanted help from Ravana. In turn he promised to hold the Shivling for him while he (Ravana) went to fetch some food for the beggar. The Deva impersonating as beggar placed the Shivling on ground, in absence of Ravana. The Shiva idol or the Shivling at Baijnath temple is the same Shivling which was placed by the Deva after tricking Ravana.

How To Reach Baijnath Temple

The Nearest Airport is Kangra airport.