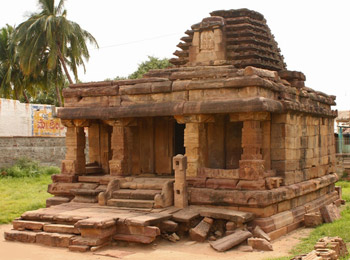 
Ayhole is a village having a historic temple complex in the Bhagalkot district of Karnataka, India and located 510 km away from Bangalore. It is known for the Chalukyan architecture, with about 125 stone temples dating from 5th century, and is a popular tourist spot in northern Karnataka. It lies to the east of Pattadakal, along the Malapraba River, while Bhadami is to the west of both. With its collection of architectural structures, Ayhole temple complex is on the waiting list of UNESCO World heritage sites.


Badigera Gudi literally means the carpenter's temple. It was named so because a carpenter's family occupied the premises before the government took over. Dating back to the 9th century, this is originally a Surya (Sun) Temple, as is indicated by the image of sun on the projection of the Curvilinear tower on the garbhagriha (sanctum sanctorum) and the temple has in addition to the Garbhagriha, as Rangamantaba and a Mukhamantaba, and there is an image of Dhakshabrahma in the temple.

Four central pillars, twelve pilasters and mukhamandaba were used to support a hall that was present here earlier. The garbagriha was located in the central and back bays of this hall. The temple underwent many changes between 11th and 12th centuries.


The nearest airport is in Belgaum.


The nearest railhead is Bhagalkot.