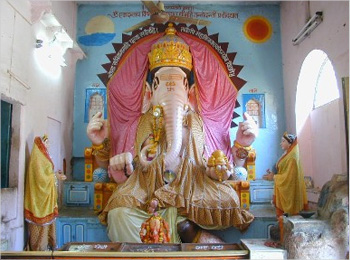 Overview : The Bada Ganesh temple is located above the tank near the Mahakaleshwar temple. The temple boasts of a huge artistic idol of Ganesha. The rarity of finding a Ganesha sculpture of this size and beauty makes this temple a really famous attraction in Ujjain, Madhya Pradesh. The centre of the temple is adorned with Pancha Mukha Hanuman. Today, the temple is considered to be a centre of training and imparting knowledge about Sanksrit and Astrology. About the deity : The temple has a red Ganesha at the entrance. On either side of him are his two wives. The shrine has a bronze idol of a five-faced, panchmukhi Hanuman. Next to the Hanuman idol, there is also an idol of baby Krishna in the arms of his mother Yashodhara. There is a red Hanuman with five heads and Lord Ram's name inscribed on his heart.There is also an unusual idol of a Black Goddess riding her lion vehicle. Legend : In this temple, in addition to God Ganesh, there is the idol of the 5 faced Hanuman. One legend behind the Hanuman idol is, during the war waged between Lord Rama and Ravana, Ravana asked Ahiravana king of Patal for help. According to Hindu cosmology, Patala is the seven lower regions of the universe which are located under the earth. In order to protect Lord Ram and Lakshman, Hanuman made a fortress with his tail. Mahiravana disguised himself With Vibeeshana, and then took Lord Ram and Lakshman along. When Hanuman entered Patal to rescue Rama and Lakshman, he found that to kill Mahiravana, he had to extinguish five lamps that burned in five different directions all at once, so he took the form of Panchamukhi Hanuman, Hayagriva, Narasimha, Garuda and Varaha, and extinguished he lamps. Darshan timings: 05:00 am to 19:00 pm Significance : In the temple, at the end of the Parikrama, visitors pass a silver swing holding the image of Baby Krishna. It is customary for devotees to give the swing a slight push and set it into motion.Devotees visit this temple to resolve domestic issues and education. How to get there or Accessibility : Air: The nearest airport is at Indore which is around 55 km from here. Rail: Ujjain has its own rail head. There are regular trains from all major cities of India like Mumbai, Delhi, Bangalore and Kolkata. Road: all cities of Madhya Pradesh are connected to Ujjain by frequent state transport buses